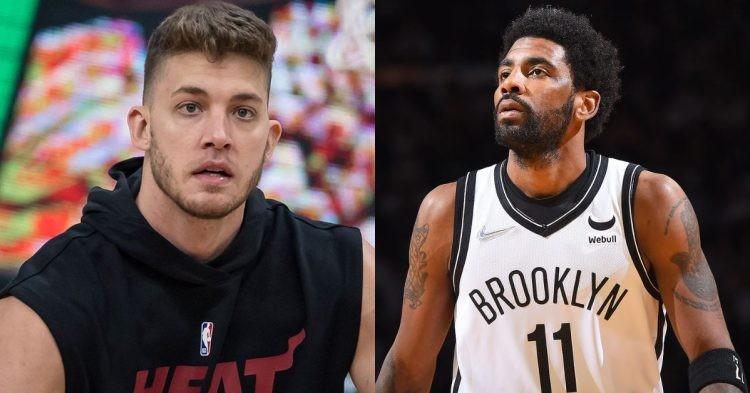 We have been hearing plenty of news regarding Kyrie Irving recently. For context, many have heavily criticized the Brooklyn Nets star after he allegedly promoted hate speech and anti-Semitic views. As we have all seen in the last few days, the NBA world has displayed that it condemns Kyrie’s actions. For example, the Nets even chose to suspend their star guard.

He has since apologized publicly, mentioning that he will work to become better and fight against anti-Semitism as well. However, it did not seem to limit the damage as Nike also decided to suspend their contract with him effective immediately.

There are still fans who do not know what Irving posted that caused all this recent commotion. If we run it back to about a week ago, Irving posted a tweet and promoted a movie. However, what caused the controversy was that the movie he spread awareness about contained anti-Semitic remarks in it and hate speech toward the Jewish community. Since then, Kyrie Irving has been facing backlash for the tweet.

In addition to that, even his tweet clarifying his intention originally went in vain after fans claimed that he was in the wrong. The punishment that Irving has to face is a 5-game suspension from the Brooklyn Nets. In addition to that, he has also lost a huge chunk of money after Nike also distanced itself away from the player.

The following was released by the NBA. pic.twitter.com/iD3GkJvekR

In addition to that, NBA commissioner Adam Silver also condemned Kyrie for his tweet. He said, “I am disappointed that he has not offered an unqualified apology and more specifically denounced the vile and harmful content contained in the film he chose to publicize. I will be meeting with Kyrie in person next week to discuss the situation.”

Kyrie’s current situation may bring us memories of another controversy regarding an NBA player. In March 2021, many criticized Miami Heat player Meyers Leonard for the same. For those who don’t know, Meyers said an anti-Semitic slur during his Twitch stream.

“I am deeply sorry for using an anti-Semitic slur during a livestream yesterday. While I didn’t know what the word meant at the time, my ignorance about its history and how offensive it is to the Jewish community is absolutely not an excuse and I was just wrong,” he wrote on Instagram.

What did Meyers Leonard say that branded him as “anti-Semitic”?

During one of his streams, Meyers was playing Call of Duty, a popular video game. However, at one point, he said the phrase, “K**e b***h”. The Heats player aimed the slur at another Call of Duty player. K**e is a derogatory term for the Jewish community. If we look at what it means, it dates back to the times when officers disrespectfully addressed Jewish migrants using the word back in the day since they were illiterate.

Meyers Leonard will also be required to participate in a cultural diversity program, the NBA says. Leonard used an anti-Semitic slur on Monday during a video game livestream. https://t.co/eHBYNBZz1w

The punishment that he received was a one-week suspension from the Miami Heat. In addition to that, they hit Meyers with a $50,000 fine. The NBA also made sure he took part in programs to understand cultural diversity.

Many wondered if the punishment he received was justified. And it has brought a question to fans’ minds right now, how does Kyrie and Leonard’s punishment compare with each other’s? One of the NBA legends, Charles Barkley, was one of the TV personalities to comment on both controversies.

About Meyers Leonard, he said, “In an organization like the Miami Heat, which I played for, this is something they don’t really tolerate. They’re going to have to believe that he was really sorry. He made a mistake. But we professional athletes, we have to realize that we’re held to higher standards. We’re watched 24/7. People like to quote us, misquote us, and we have to say the right thing, do the right thing, and we have to lead by example.”

His comments about the Nets star displayed another side of the coin. “I think he should have been suspended. I think Adam should have suspended him. First of all, Adam’s Jewish. You can’t take my $40 million and insult my religion… I think the NBA made a mistake.”

The difference in the response from the community truly tells us there might be two different sides to this. Although the reason for it is unknown, we can only watch from the sidelines as the authorities make the decisions.