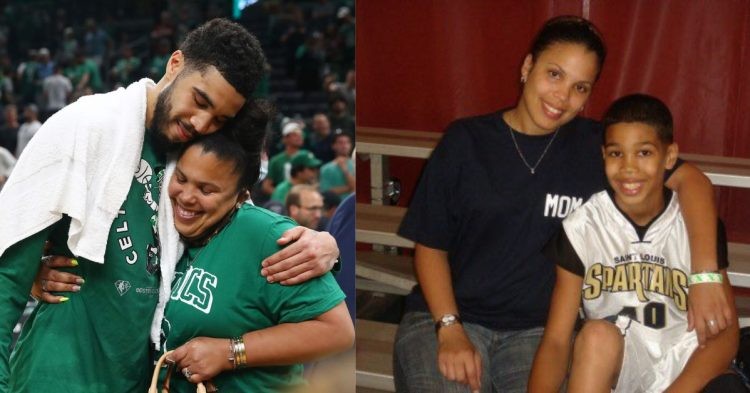 Jayson Tatum is one of the best young players in the NBA. The way he has taken the league by storm at such a young age has surprised many. The Boston Celtics drafted JT at #3 in the 2017 NBA Draft. Since then, he has been one of their best players till now.

Tatum is a player that still has a long career ahead of him. But it already feels like he has been here for a while. Recently, he appeared on a podcast for Bleacher Report with Taylor Rooks. In that, his mother, Brandy Cole, sent a video to her son sharing her feelings. The point of the video was to express something to Jayson that she had never done before.

“You would often be annoyed and look at me and you would ask ‘mom who’s gonna ask me these questions’, and I would say ‘duh the reporters like ESPN and TNT, you’re gonna be one of the best players in the world’. And you would laugh,” she continued.

It seems like Brandy knew that her son was destined for greatness. Apart from that, she knew that Tatum had the hunger to make it in one of the toughest leagues in the world. As I mentioned earlier, at just 24, he has a bright future ahead of him. JT is already playing like a world-class player, with the right amount of discipline and dedication.

Jayson was unlucky this season to not win the NBA title against one of the best sides in the league. If we’re being honest, the Celtics’ youngsters did give the Warriors a run for their money at times during the finals. Unfortunately, they could not break down their formidable and famous trio. Despite this, we can be sure that Tatum will come back stronger next season with the Celtics and Jaylen Brown.