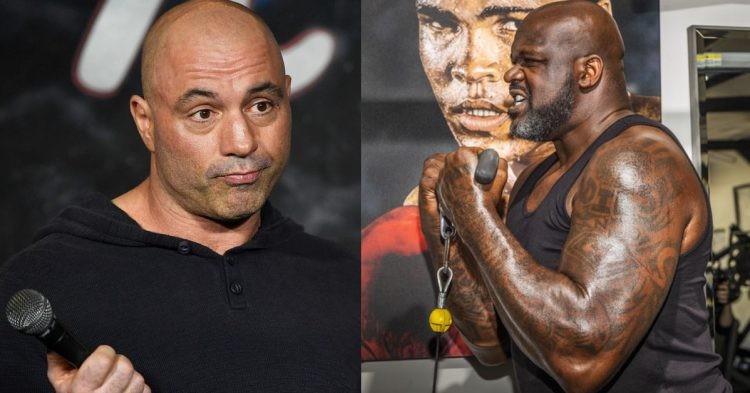 In the NBA, there have been absolutely huge players. Then there’s Shaquille O’Neal. Although he may not have been the tallest player in the NBA, he was still a giant. Standing at 7 feet 1 in tall, Shaq stood over everyone he played against.

The former Los Angeles Lakers star has dominated the league during his time. O’Neal won 4 NBA Championships. That includes the famous three-peat(2000,2001 & 2002) for the Lakers, together with Kobe Bryant. His other title came with the Miami Heat in 2006.

We all know Shaq used his size to the fullest. Even at that height and weight, he was still one of the most agile big players during his time. Just solely based on how big he is, how would Shaq do as a fighter? Joe Rogan has his say.

During Joe Rogan’s podcast, another speaker asked what was the maximum weight to compete in the UFC. The 55-year-old replied, “265 [pounds], isn’t that weird? These are super heavy. We’ve never had a super heavy fight, but super heavyweight is 265 and above.”

Rogan spoke about whether the former NBA champion would be able to fight in the UFC with his size. He claimed, “A guy like that could never fight in the UFC, cause he probably can’t make 265. If he did he would be shredded. He’d have to lose 75 pounds. He’s so big.”

Rogan’s comments may not come as a surprise. At 330 pounds, it would surely be hard for Shaq to lose that much weight. However, he was 294 pounds exactly when he introduced himself to the NBA. For context, that was the time when he played for the Orlando Magic.

If any version of him had a shot at the UFC, it would be that. At that age, losing 30 or 40 pounds would not have been that much of an issue for him. Despite weighing that much, the former Lakers center was always explosive and agile. With all his qualities during his prime, Shaq could have definitely had a shot at the UFC.

A fact that not many would have known is that Shaq used to train MMA. He even revealed once to ESPN MMA that it was the reason for him to become a champion in basketball.

Shaquille O’Neal said, “MMA is the reason I became a champion. I always used to practice basketball. It wasn’t enough. Because when I played basketball, it was more wrestling. So when I trained MMA with Jon Burke, a friend of mine down in Orlando, I came back in the best shape of my life. That was in 2000.”

He also revealed how big a fan he was. “I’ve been to almost all of the top UFC fights, those guys are specimens. I wish I could hit some of those NBA guys I used to play against like that. So I’ve definitely been a fan of MMA.”

If you thought DJ Diesel was just a fan, you were wrong. More than a decade ago, he called out Hong-Man Choi, a South Korean kickboxer. He stood at 7 feet 2 in tall and weight around 350 pounds. It seemed like Shaq fighting the giant only made sense since they both were of similar size. However, that fight did not happen eventually.

He mentioned, “I wanted Dana [White] to come back and set it up but nobody ever did. I definitely would have given it a try.” His comments remind us of what we missed: one of the biggest NBA players in the octagon. That surely would have been a sight to see.