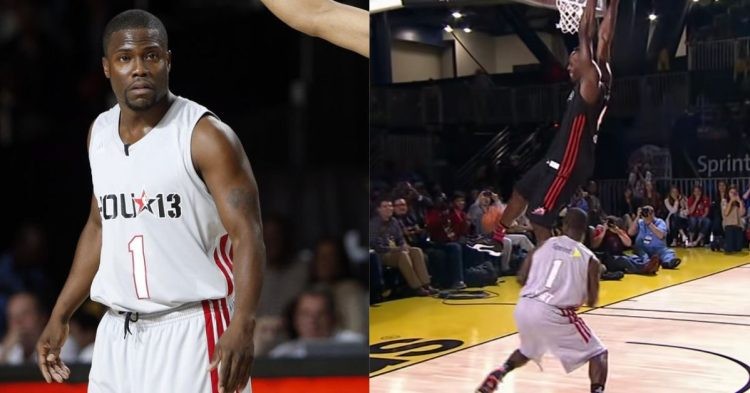 Usain Bolt is considered by many to be one of the best athletes that this world has ever seen. As many fans will know, he has set records in the world of sprinting that haven’t been broken even after his retirement. It also turns out that Bolt has a passion for basketball and even showed up at the 2013 NBA Celebrity All-Star game.

Those who have watched the NBA for years know that the Celebrity game usually occurs during the all-star weekend and several prominent personalities try their hand at it. From rappers and musicians to actors and other athletes, the list of people who have been invited over the years is quite impressive.

Bold was invited to play during the 2013 NBA Celebrity all-star game and his play ended up infuriating a well-known actor and comedian, Kevin Hart. Fans must certainly want to know what Bolt did in this showcase game and why it ended up causing Hart to feel quite annoyed.

Usain Bolt has a vertical jump rivaling that of NBA stars

Usain Bolt might just have turned out to be a decent NBA player had he not focused all his time and energy on sprinting and other forms of races. According to the reports, he is listed to have an incredible 44-inch vertical jump. That is compared to some of the best players in the NBA like Golden State Warriors star Andrew Wiggins.

Bolt put his elite jumping ability to good use during the 2013 NBA Celebrity All-Star game. He ran down the court at an incredible pace and speed. When he was fed the ball, he gathered and rose up to throw down a two-handed dunk. This is something that is quite rare to see and very difficult to do.


Especially for someone with a significantly smaller build like Kevin Hart. When he saw what Bolt managed to do, he immediately demanded that the bucket be waived off under the reasoning that Usain traveled with the ball, taking far too many steps before jumping into the air and finishing with a dunk.


Unfortunately for Hart, the referees must have missed this call over all the hype and excitement following the unexpected dunk. This was despite Hart yelling out that Bolt took 9 steps before completing the dunk. In Usain’s defense, it appears to only be around 3 steps or 4. Therefore, he was able to get away with it and add a dunk to his legacy in sports.