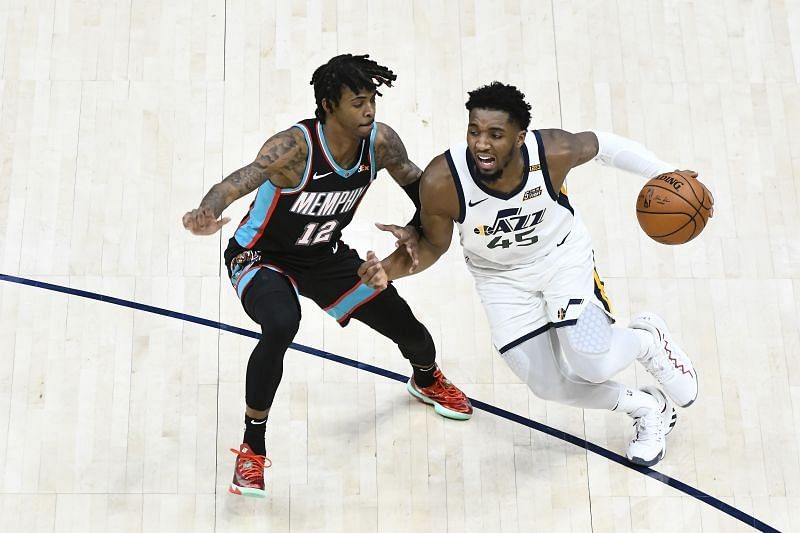 The third seed Utah Jazz take on the ninth seed Memphis Grizzlies in their first matchup of the 2021-22 NBA season. Memphis arrives in Utah after a humiliating 43-point blowout loss to the Minnesota Timberwolves. Whereas the Jazz is in top form as they enter this game on a three-game winning streak.

The Minnesota Timberwolves embarrassed the Memphis Grizzlies as they handed them a 43-point loss. Karl Anthony Towns, Anthony Edward and Diangelo Russell tore apart the Grizzlies who were on an upward climb in the western conference playoff race. One of the very few positives for the Grizzlies was the return of defensive stopper Dillion Brooks who has just played four games this season. Brooks has averaged 19.3 points, 3 rebounds, and 1.3 steals per game.

not an ideal start.

In Dillon’s absence, players like Desmond Banes and Jaren Jackson junior have stepped up their game on both offence and defence. But for the Grizzlies, Ja Morant has been the brightest star as he started the season with MVP level stats. Morant had a bad outing against the Wolves and will look to comeback against the Jazz.

12 points. 3/3 from long range in the first quarter. pic.twitter.com/puo5vFEhhk

Like the last season, the Utah Jazz is on pace to dominate the western conference again. They are 6-2 at home and are 11-5 overall for the season. Led by the season’s core of Donovan Mitchell, Rudy Gobert and Mike Conley, the team has looked rock solid. The team looks close to perfect with the right mix of flair, talent and depth. The Jazz are also one of just three teams to be in the top five in both offensive and defensive ratings.

Utah’s continued ascent as a western conference powerhouse coincides with Donovan Mitchell’s growth as a player. Nicknamed the Spida, Donovan Mitchell has emerged as one best on-court leaders in the league. The 25-year old is entering his prime and has been the perfect player for Coach Quin Snyder’s tactical Jazz.

The Utah Jazz has a slight upper hand over the Grizzlies as they have a more complete and healthy roster. With stars like Rudy Gobert, Donovan Mitchell, Jordan Clarkson all clicking, it is going to be an uphill battle for the Grizzlies. Jazz also has a great record against Memphis and hence are the favourites to win the game.

But Memphis will go all guns blazing to avenge a humiliating loss and get back on track in the playoff race. We have seen Ja Morant catch fire and in minutes take the game away from the opposition. He will be more focused as he had one of his worst games against the Wolves.

All players are reported to be fit.

How to watch Utah Jazz vs Memphis Grizzlies?

The matchup between the Memphis Grizzlies and Utah Jazz will be live-streamed with an NBA League Pass. The game will be locally broadcast on AT&T SportsNet – Rocky Mountain (ATTSN-RM) and Bally Sports Southeast – Memphis (SE-MEM).