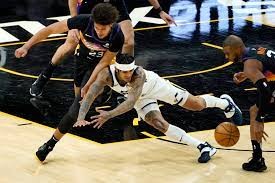 The Utah Jazz travel to the Footprint Center for a Western Conference clash with the Phoenix Suns on Monday night. Both teams go head to head for the first time in the 2021-22 NBA season. Suns enter this game after defeating the Pacers 113-103 whereas the Jazz lost to the Warriors 94-92 in their last matchup.

The Utah Jazz started the season as one of the best teams in the league but recently they are experiencing a dip in form. In the last six games, the Jazz has lost to the Warriors, Rockets, Lakers and Cavaliers. The Jazz comes into this contest 1st in the league in scoring offence with 114.7 points per game this season. Utah is 3rd in rebounding by pulling down 46.5 boards per night while standing 25th by dishing out 22.5 assists a night. Utah is 12th in the league in scoring defence as they allow 107.4 points per contest.

Donovan Mitchell leads the Jazz with 25.5 points plus four rebounds and 5.2 assists this season. Mitchell also tops from three-point range for the Jazz, knocking down 3.2 threes per game. Rudy Gobert leads Utah in rebounding with 14.6 rebounds while scoring 15.6 points per game.

The Phoenix Suns are currently the best team in the 2021-22 season with a record of 36 wins and nine losses. The Valley Boys enter this game on a six-game winning streak as they defeated Raptors, Pistons, Spurs, Mavericks and Pacers twice. The Suns are 3rd in the league in scoring as they average 112.5 points per game on the year. Phoenix is 5th in the league in defence as they allow an average of 104.5 points per game.

Devin Booker leads the Suns in scoring, racking up 24.3 points per game. Booker leads Phoenix from the 3 point line as he is making 2.6 shots from beyond the arc per game. JaVale McGee led the Sund in rebounding with his seven rebounds per game. Whereas Phoenix’s assist leader is Chris Paul with his 10.1 assists per game.

Utah Jazz is going to be battling fatigue with playing the second game of a back-to-back and their third game in four nights in their third different city coming into this one. It’s tough enough to deal with the Suns on even footing with rest and if your team is healthy.

The Jazz is going to be battling fatigue and could miss their star Donovan Mitchell, who is their leading scorer, and they have other injury issues. Whereas Phoenix has a healthy roster and is on a six-game winning streak. Hence the Suns are the favourites to win this game against the Jazz.

How to watch Utah Jazz vs Phoenix Suns?

“Who Gives a Damn About Excuses, You either Make Shots or Miss Shots”: Stephen Curry Reflects on His Prolonged Shooting Slump This Season