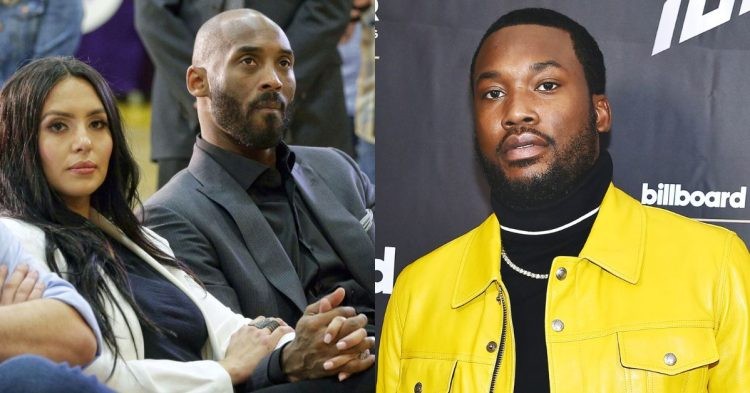 Late Lakers legend and Hall of Famer Kobe Bryant died almost 3 years ago in a tragic accident involving a helicopter crash. The sudden passing away of one of the all-time greats took the whole world by surprise. They joined the grieving NBA fraternity, as thoughts and prayers poured in for the Bryant family.

Kobe was a personality that transcended the sport of basketball. His rich legacy contained not just multiple NBA titles and accolades, but also success post-retirement, most notably winning an Oscar.  His competitive nature and drive were well-known and praised, and he showed no signs of stopping until his unfortunate demise.

Bryant was one of the seven people who died in the helicopter crash on January 26, 2020, in the city of Calabasas, California. Those dead included his then-13-year-old daughter Gianna Bryant. After his death, his widowed wife Vanessa Bryant took over his estate.

Did Meek Mill disrespect Kobe Bryant in his song?

While the Bryant family took its time moving on from their tragic loss, some took no time in using Kobe’s name for their personal interests. One such incident involved rapper Meek Mill. A song of his leaked around mid-February in 2021 in which Meek apparently referenced Kobe’s death.

The song, which also featured Lil Baby, was called ‘Don’t Worry’. It reportedly contained the lyrics: “This bitch I’m fuckin’ always tell me that she love me / But she ain’t ever showed me / Yeah, and if I ever lack, I’m goin’ out with my chopper / It be another Kobe.”

The last bar was apparently a reference to Kobe’s cause of death, which was a helicopter crash. The lyric did not go well with fans, who immediately called Meek out for it. However, Meek seemed to respond by saying that those lyrics had been misinterpreted.

somebody promo a narrative and y’all follow it…. y’all internet antics cannot stop me ….shit like zombie land or something! Lol

However, Vanessa then addressed the controversy herself, calling out the rapper directly via an Instagram story. “Dear @meekmill,” Vanessa wrote. “I find this line to be extremely insensitive and disrespectful. Period.” “I am not familiar with any of your music, but I believe you can do better than this,” she continued. “If you are a fan, fine, there’s a better way to show your admiration for my husband. This lacks respect and tact.”

The powerful message apparently made the rapper apologize to her, albeit in private, as the then 33-year-old rapper tweeted: “I apologized to her in private earlier today not to the public… Nothing I say on my page directed to a internet viral moment or the family of a grieving woman!”

I apologized to her in private earlier today not to the public…Nothing I say on my page directed to a internet viral moment or the family of a grieving woman! If you care about someone grieving change the subject!

Interestingly, the rapper hails from the same town as Kobe, Philadelphia. It’s unclear why he wrote that lyric at such a sensitive time, but Vanessa’s reply seemed to have brought him back to his senses. The leaked song has since been removed from social media.

Messi vs. Ronaldo: We Asked the ChatGPT AI to Name the Soccer GOAT