Victor Wembanyama Parents and Siblings: It’s a Family With Genes for Height and Basketball 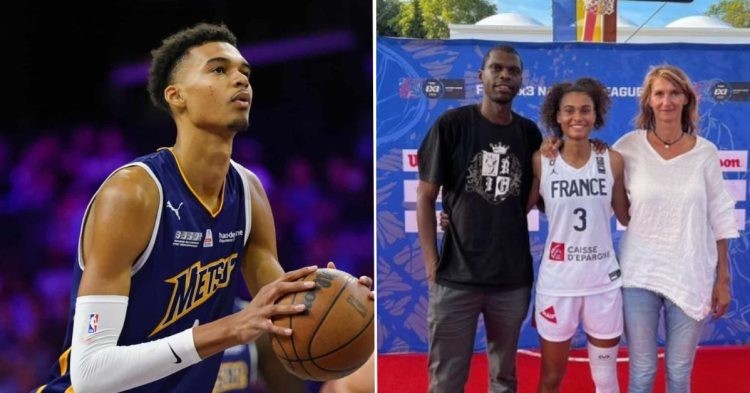 French prodigy Victor Wembanyama has taken the NBA world by storm. The 19-year-old 7’2″ forward currently suits up for the Metropolitans 92 in the LNB Pro A League and has his eyes set on the upcoming NBA draft. Conversely, there are countless eyes set on him as he inches closer to entering the draft as the consensus top overall pick and is widely considered one of the greatest prospects of this generation.

Victor Wembanyama on the cover of SLAM. 🔥

One of the most hyped draft prospects since LeBron James back in 2003, Wembanyama’s size, shooting, and guard-like skills for a player of his height have got NBA teams putting dedicated efforts to tank for the generational talent.

Is it in his genes? Were his parents athletes too? Let’s look beyond the surface of what makes Wembanyama such a special prospect.

Where is Victor Wembanyama from?

Victor was born on 4 January 2004 in Le Chesnay, France. His father, Felix Wembanyama, is of Congolese descent. His mother, Elodie de Fautereau, is of French descent and has been a major influence in Wembanyama’s basketball career. Before concentrating on basketball, Wembanyama trained in judo and also played football as a goalkeeper.

His mother, Elodie, was a youth basketball coach and taught Victor how to play the game. Victor began playing with Entente Le Chesnay Versailles at the age of seven, and at age 10 he transferred to Nanterre 92’s youth program. He attended college (known as lycée in France) at Nanterre and earned his baccalauréat with honors, specializing in earth and life sciences and social and economic sciences.

After performing admirably for France in a matchup against 7’0″ Chet Holmgren and USA Basketball at the FIBA U19 World Cup in 2021, Wembanyama started to acquire recognition on a global scale. Fellow Frenchman Tony Parker subsequently signed Victor to his club ASVEL for the 2021-22 season.

After leaving ASVEL, Victor signed a two-year contract with Metropolitans 92 of the LNB Pro A around July 2022, where he’s had multiple standout performances.

How tall are Victor Wembanyama’s parents?

Genes have definitely played a role in shaping Victor’s towering personality. Victor’s father, Felix Wembanyama is a 6’6″ former track and field athlete. He competed in sports like the high jump, long jump, and triple jump. On the other hand, his mother coached young basketball teams and is also 6’3″.

Agent Bouna Ndiaye, who represents French National basketball team members like Nicolas Batum and Rudy Gobert, had known Victor’s mother for a long time. He had also constantly been told that he needed to see Victor in action to see how special of a player he was.

For years, Ndiaye balked, but finally got a chance to see Victor play when he was 13. Afterward, he said, “My friend told me, ‘The son of your friend [de Fautereau] is big-time. You have to go watch him. He’s 13. You have to go watch him. He’s special,’ So finally, I went. I called his mom and told her I was coming for fun. Not working. I’m coming as a friend. So, I went to watch. But when I saw him, I knew he was just special by the way he passed, dribbled …”

“I saw him a few times after that and with the French U-16 team. He’s unlimited.”

Ndiaye joins countless other scouts who have been left speechless by the basketball smarts and overall poise of young Wembanyama.

Who are Victor Wembanyama’s siblings and do they play basketball?

Victor is not the only child of their parents who is into sports. His elder sister, 21-year-old Eve Wembanyama, also plays basketball and most recently played as a Small Forward for Monaco in France – LF2 (W).

With such a sport-intensive family background combined with his physical gifts, there is no doubt as to why NBA scouts are so high on Victor’s potential. If his body holds up against NBA pros, he certainly has all the tools in his arsenal to live up to the hype, just like LeBron James did, back in 2003.

No More Messi And Ronaldo? This Viral Video Is Causing a Stir