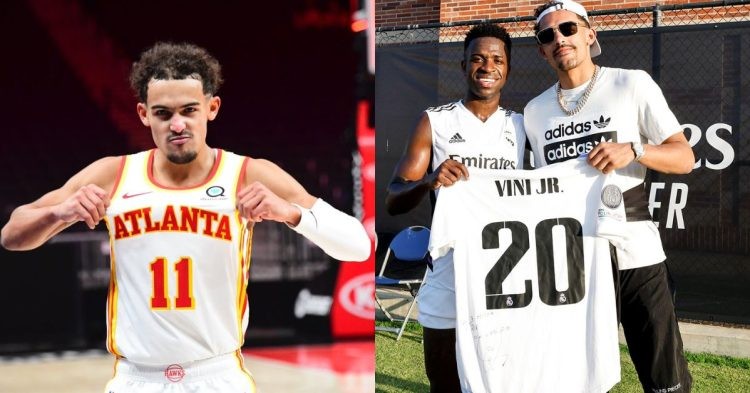 Trae Young is a young NBA player that has already made a name for himself in the league. The Dallas Mavericks picked up the Oklahoma Sooners at No.5 in the 2018 NBA Draft. However, they agreed on a trade with the Atlanta Hawks that saw Luka Doncic going to Texas.

The Hawks youngster is going into his fifth NBA season in his career. He averaged almost a double-double during the 2021-22 season. His numbers were 28.4 points, 3.7 rebounds, and 9.7 assists. One of his games in the recent season also included him scoring a whopping 56 points, against the Portland Trail Blazers. In just 37 minutes, he also racked up 14 assists and 4 rebounds.

Although the Trail Blazers took home the win, seems like Trae loves playing against them. Later in the season, the Hawks beat them in the reverse fixture. Once again, Trae showed up in style. He made 46 points, 12 assists, and 6 rebounds in just 39 minutes this time around.

After a wonderful season, Trae has been having a relaxing time. Recently, he visited the Real Madrid camp in Los Angeles. The European Champions are currently on their pre-season tour. Their next game will be against Juventus at the Rose Bowl stadium.

Trae Young and Vinicius Junior are stars in the making

Young attended Real Madrid’s training session at UCLA. His attendance was a shock to many as his friendship with Vinicius was unexpected. Despite speaking different languages and playing two sports, the pair connected. Just like Trae, Vinicius is also a young star of the game with skill and flair. He was also criticized initially when joining Real for his style of play, which haters addressed as “selfish”. That was the case with Trae as well.

When Trae was at the camp, the 2022 UCL Final scorer gave a jersey to the American. Real Madrid posted a video of Trae on Twitter. He said, “It’s exciting, it’s crazy. It’s a different sport for me, I have a lot of fun around here and I’m happy they let me be here watching.” Trae also answered a question by the interviewer who asked if he knew Luka.

He mentioned, “yeah, won y’all a championship, yeah I know, he’s a big-time guy over there, he’s a good friend of mine too. We’re cool guys.”

The two young NBA superstars have become good friends along the way. Trae even reacted in a wholesome way to Luka’s crazy half-court shot at the NBA Rising Stars game.