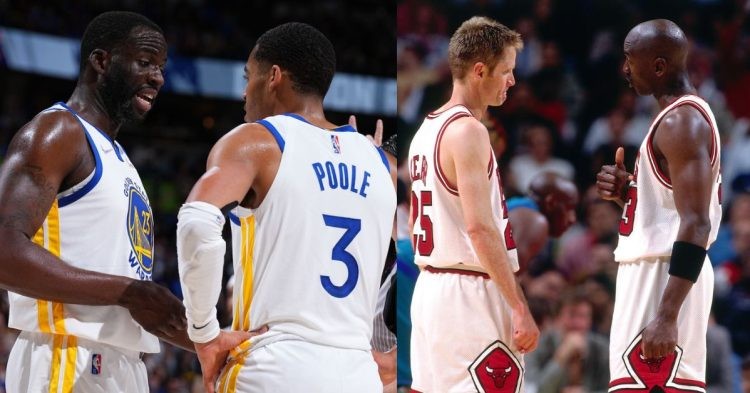 The NBA world was shocked to find out that Golden State Warriors stars Draymond Green and Jordan Poole got into a physical altercation. While this is certainly a serious issue, some have used this event to remind us about another. One where NBA legend Michael Jordan and now Warriors coach Steve Kerr got into a fight of their own.

As there are few fans today who saw MJ play, not many can attest to or explain why these Bulls players also got into a fight. Now Steve Kerr’s players have done something similar. Thus, this has caused fans across the internet to draw parallels between both incidents.

Michael Jordan punched Steve Kerr when they were teammates. Steve Kerr now coaches the Warriors and one of his players named Jordan gets punched. The circle is complete?

This leads us to wonder if there are any similarities at all between both these fights. Or perhaps they should consider if this is just another attempt to dig up old bones.

The whole incident between Jordan Poole and Draymond Green could have given their coach Steve Kerr a sense of De Ja Vu. When he reacted and responded to the news, NBA fans were quick to recall how he got into something very similar many years ago with NBA legend Michael Jordan.

I don’t know who needs to hear this but Michael Jordan punching Steve Kerr in practice doesn’t justify what Draymond did. Being the GOAT doesn’t mean you are infallible.

To those interested, this occurred during a practice game for the Chicago Bulls. MJ and Steve Kerr were on opposing sides as the game got increasingly heated. Jordan was at his peak and kept the trash-talk going throughout the game.

Draymond heard Steve Kerr tell the story about Michael Jordan punching him in practice too many times and took the wrong lesson from it.

Steve, who would not have particularly enjoyed these words grew quite agitated with Michael’s play. Thus, when he felt MJ was fouling people harshly, he intervened and threw a punch at Jordan’s chest or at least pushed him harshly.

Wait what? The story of Michael Jordan punching Steve Kerr was not framed as a “heroic” tale of toughness.

It was an example of MJ being a psychotic asshole. Please stop. https://t.co/8bwkZR0nBb

That is one of the last things anyone should do to the great Michael Jordan. MJ responded with a devastating blow that struck Kerr right in his eye.

What makes me happy in all of this is that Steve Kerr is the coach. He has been through this before when he was at Bulls and got punch by Michael Jordan. Hopefully he can use his experience and how they solved it to settle this issue now cos this is bad

Unfortunately, we do not have footage of this physical altercation like we do for Poole and Green. This is also because practice games were not usually recorded back in those days.

If you want to know Michael Jordan and Steve Kerr’s thoughts on fights at practice, here they are from a couple years ago: https://t.co/guWONkFffJ

In any case, the Warriors will hope to move on from this incident as soon as possible. Just like Michael Jordan and Steve Kerr did when put in a similar situation.