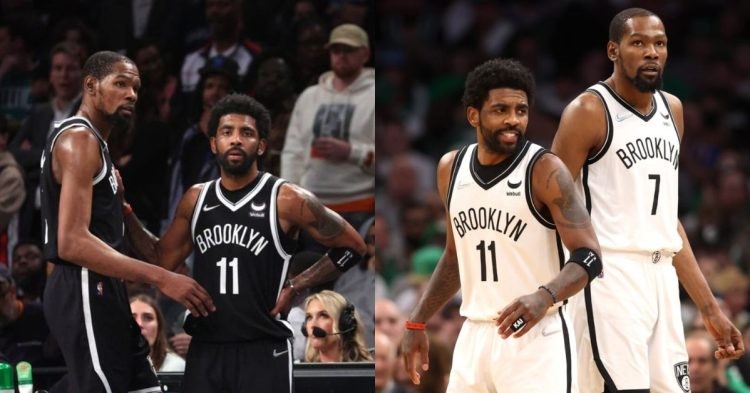 One of the biggest things to happen in the NBA this year was Kevin Durant’s trade saga with the Brooklyn Nets. For context, KD officially submitted a request to leave Brooklyn in the summer. The news was shocking on its own. But what was more surprising was the fact that he decided to hand in a request just days after Kyrie Irving chose to stay.

During the offseason, there were many reports surrounding Kyrie’s future as well. According to many sources, the LA Lakers were one of the favorites to sign him as LeBron James reportedly looked for a reunion. In the last few months, Irving has teased the move more than once. One of them included an appearance at the LA Sparks game, while he also fueled trade rumors after withdrawing from the Drew League at the last minute.

However, “Uncle Drew” decided that he was going to run it with the Nets organization. He opted in with the mindset of playing for the Nets. However, he did not expect Kevin Durant to want to leave.

Can Kyrie Irving and Kevin Durant win the NBA championship together at the Brooklyn Nets?

Recently, Irving finally spoke out on KD’s situation over the summer. He said on 2022 NBA Media Day, “It was on Kev from the beginning. I honored his trade request and understood it. There’s been a lot of uncertainty in this building for the last couple of years. You’re watching your best friend go through now the other side of the media storm that comes with this trade request. And being in the middle was kind of like a clusterf***.”

It seems like Kyrie agreed with KD to an extent. The “Slim Reaper” recently also said revealed the real reason for his trade request. He said, “Guys in and out of the lineup, injuries, just a lot of uncertainty which filled some doubt in my mind about the next 4 years of my career.”

Kyrie understood his friend’s reasoning for wanting to leave. As Durant mentioned, the Nets roster did not have the stability he wanted to have at a team. He also claimed, “I want to be in a place that’s stable and try to build a championship culture”. Considering his age(33), he may not have many years left in the tank. Hence, Durant would have to be smart about the choices he makes.

Irving also mentioned that he could relate to his teammate. He expressed the discomfort he faced when Durant went through the same hardships thrown at him by the media. In Kyrie’s case, that happened when he refused vaccinations and had to miss games for the Brooklyn Nets. Currently, both Kyrie and KD are looking to bring the NBA title to Brooklyn after putting all the things that happened in the summer behind them.