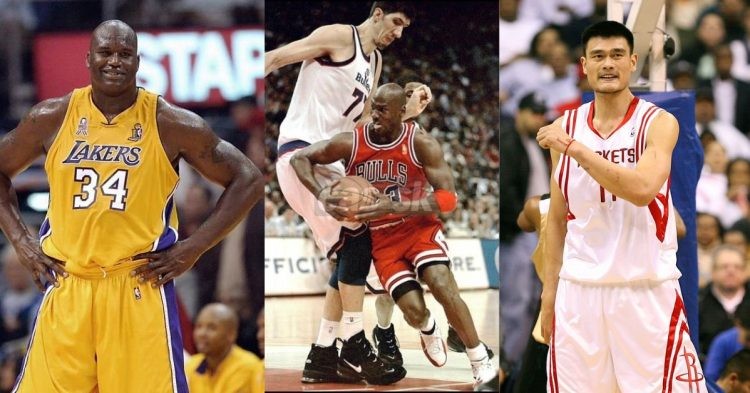 Shaquille O’Neal is considered one of the most unstoppable forces in the sport of basketball. He won 4 NBA titles throughout his career and has a larger-than-life personality. Shaq is listed as 7’1 and seems to tower over other NBA players. Yao Ming was one of the few players he played with who seemed taller.

There have been several large centers in NBA history. Therefore, one must wonder if he is the tallest player in the NBA. Avid basketball fans will already know that he is not the largest player ever. Be that as it may, it is important to know which players are larger than him. Moreover, one must also wonder what these players have accomplished with their god-given size.

There have been several players much larger than Shaquille O’Neal

Statistics indicate that there are roughly only 2,800 7-footers in this world. An average NBA fan would think that height is all that is required to become a successful professional basketball player. However, most of these giants do not possess the stamina, reflexes, and conditioning to become NBA players. Thus, the ones who are able to control their large frame and move nimbly are more likely to be deemed special.

There aren’t too many players who are capable of doing the above.  An argument could be made that Shaq is certainly the most successful 7-footer to play in the league. Nonetheless, here is a list of notable basketball players taller than the 4x NBA champion.

As shown in the table, there have been several players taller than Shaq. However, very few were consistent on the offensive end of the basketball court. It is important to note that Yao Ming and Kristaps Porzingis are the only players on this list who have averaged more than 15 points per game throughout their careers. Moreover, Shaq is the only player to average north of 20 points per game.

O’Neal might not have been the biggest player to ever play in the NBA. Be that as it may, he was certainly a powerhouse unlike any of the other players on this list. His agility complimenting his girth made him a force to be reckoned with.