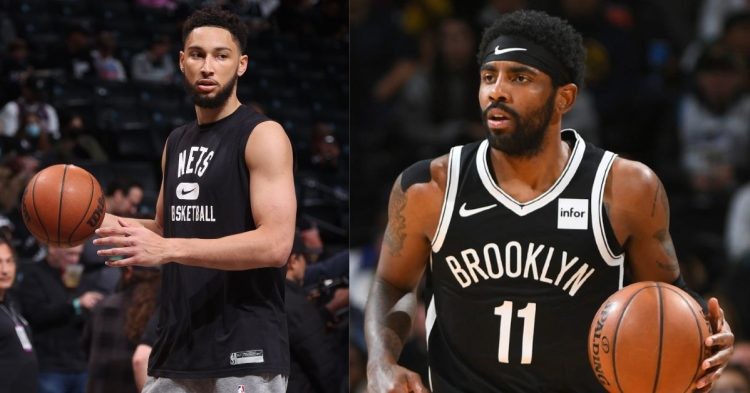 Mental health has been one of the most important talking points in the NBA in recent times. Many players have come out and expressed their feelings about their problems openly nowadays. One of those players would be Brooklyn Nets newbie Ben Simmons. He has spoken about how he had a hard time continuing his NBA career during when he played for the Philadelphia 76ers.

Recently, Simmons has even called out NBA legend Shaquille O’Neal. The reason for that was because the 50-year-old said Simmons was his “LSU Brother”. Despite that, he still did not reach out and offer to help the young star, said Ben when expressing his disappointment.

This time around, his fellow Nets teammate has publicly claimed that he has Simmons’ back. It is none other than the one and only Kyrie Irving. Kyrie has had his fair share of mental health issues. It isn’t that surprising considering how majority of the media portrays him when it comes to certain issues.

For example, Kyrie received a lot of hate when he refused to get a vaccination. He also missed home games for the Nets because of the law in the state. This surely affected his mental health.

Can Ben Simmons and Kyrie Irving form a big 3 with Kevin Durant to win the NBA title?

Kyrie told ESPN, “It means everything. It means they come in with a peace of mind. And they just enjoy the game of basketball. It’s a profession for sure, I don’t want to knock that, it’s a seriousness about it, but building team camaraderie takes that ability to go through some uncomfortable moments and you got to be balanced mentally, spiritually, emotionally, be able to handle things like that.”

“Just wait for him to look like he’s in All-Star form again, which I know will happen soon” pic.twitter.com/agIMfxJuug

“So I definitely have first-hand experience, I don’t want to make mental health a trend. In actuality, it’s one of the most important things that you need out here to be great in anything you do. We all are supportive, we all go through our own things, but we can understand and meet him where he’s at and just have him enjoy the game. Rather than make it feel like it’s something he’s forced to come to at all. So I feel good,” Irving added.

As Kyrie said, mental health is important for anyone to succeed in any particular field. And he has publicly offered support for Simmons, which suggests that he is willing to be a pillar of support for the 25-year-old. Moreover, he has also recently sent a message to the world. Kyrie expects the former Sixers star to regain his old form and help the team win games.