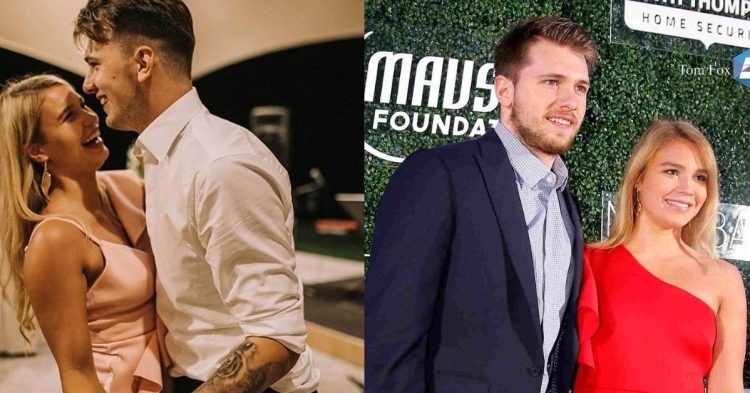 Luka Doncic is grabbing the spotlight, ever since coming to the NBA. The Slovenian is playing for the Dallas Mavericks. Doncic this season is putting up a performance that is attracting comparisons with the great, Michael Jordan.

It is surprising to know that Luka is just 23 and is stacking such numbers. With this said, his relationship has come under the spotlight. Luka made headlines in the 2020-21 season when he appeared flirting with NBA referee Ashley Moyer-Gleich. He also spoke about having a crush on Hollywood actress Jennifer Aniston. With this said, Luka is in a relationship with a 25-year-old Slovenian Model and influencer, Anamaria Goltes.

Anamaria and Luka have been childhood sweethearts and met each other when they were just 12 years old. Anamaria revealed how she met the NBA superstar, “I’ve answered this question like a million times. We met when we were 12 years old at the seaside in Croatia. Fun fact: We still have the same group of friends we had at that time. You keep the real ones, am I right?”

Luka and Anamaria have a live-in relationship and live with three dogs Viki, Hugo, and Gia. The couple officially started dating in 2016, but the pair split up before 2018 when he got drafted that year. The couple is now back together, Luka and Anamaria spent a lot of time in quarantine due to the COVID-19 pandemic. Both of them spend a lot of time traveling to meet each other.

What does Luka Doncic’s girlfriend do for a living and what’s her net worth?

Anamaria is a model by profession, her career started during her college years, and made a move to the United States. She started by posting pictures on social media platforms which gave a boost to her passion. She has been approached by the international agency IMG and represented Campbell Models and Immortal Model Management.

Anamaria has 164K followers on Instagram. She often posts her workouts on social media and has attracted followers who consider her a fitness instructor. Anamaria makes her living mostly through modeling and a fitness career. Her net worth is estimated at around $250,000 USD.