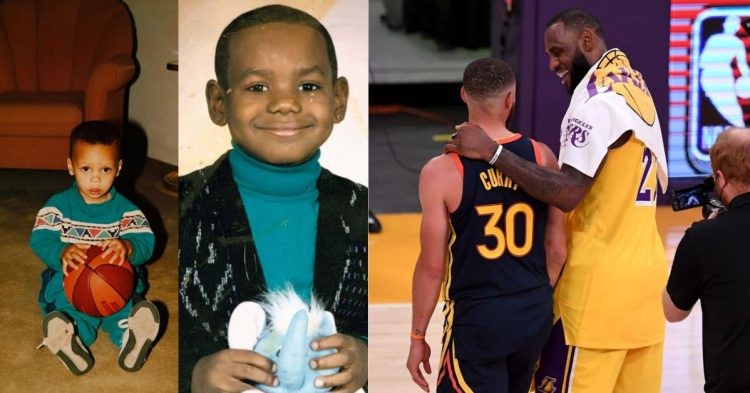 In life, coincidences are far and few. You’ve probably heard of freaky coincidences that have sent shivers down your spine. In the NBA, there have been a ton of compilations that you can binge-watch to start believing if we are living in a matrix or not. But, here is one of the best ones and it involves Stephen Curry and LeBron James.

LeBron James and Stephen Curry created one of the best rivalries in the modern NBA. They played in 4 straight finals from 2014-18. The first 2 finals were some of the most entertaining ones in the history of the NBA. The 2016 NBA finals saw a 73-win team squander a 3-1 lead to a team that has never won a major sports trophy. They’ve had a lot of respect for each other but it turns out their relationship existed beyond the 4 walls of the NBA court.

They were born less than 4 years apart in very different situations. But they both ended up as 2 of the greatest players in NBA history. The coincidence is eerie, to say the least, but if one wants their child to become an NBA great, being born in Akron General Medical Center is a great start.

“We share a lot in common. Born in the same hospital. I do claim Akron as my birthplace. It’s pretty dope that he is the kid from Akron but to know two guys from Ohio are at the highest level right now.”

Steph Curry grew up in Charlotte but is not sweeping Akron under the rug. He’s proud to be born there and proud to share something similar with LeBron James. However, the narrative has been stretched to some extent where even Curry and LeBron cannot keep up with the details. But the facts still stand that 2 out of the top-10 players in NBA history were born in Akron.