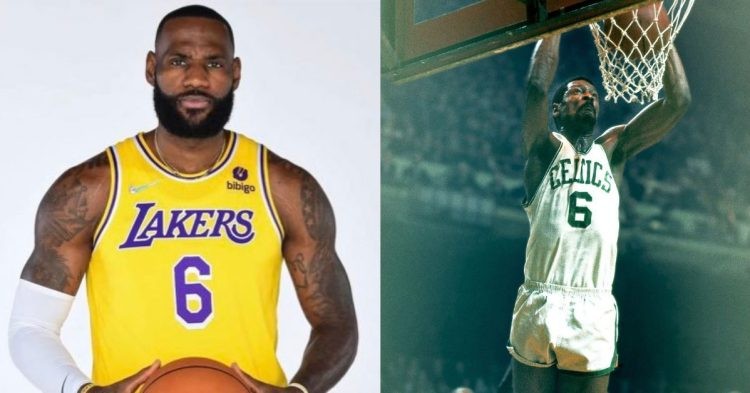 The legendary Bill Russell passed away at the age of 88 a couple of weeks ago. Earlier today, the NBA announced that Russell‘s jersey number 6 will be retired across the league. He becomes the first NBA player to have his jersey retired throughout the entire league. Many players in the league wear the number, including LeBron James.

The NBA will retire Bill Russell’s No. 6 league-wide, the league and NBPA announced.

Russell becomes the first player in NBA history to have his jersey retired across the Association. pic.twitter.com/vAwELYWjfa

The NBA retired a number that many players wear currently. Hence, many are curious to find out what will happen to players who registered for the number for the 2022-23 season.

Reports say the Association will allow the existing players who wear the number currently to keep it. Reports say that the current players will keep it, but the league will not allow teams to issue it in the future.

BREAKING: The NBA will retire jersey No. 6 in honor of the late, great Bill Russell.

All players who currently wear No. 6 will be allowed to keep it, but No. 6 will not be issued again by any team to any player. pic.twitter.com/X5VWJt7d4K

“Players who currently wear No. 6 will be grandfathered”, according to the NBA. It seems like LeBron will continue to wear the number for the upcoming 2022-23 NBA season. The 37-year-old wore the same number during his time at the Miami Heat. He initially wore the 23 for the Lakers but chose to change in 2021.

The NBA announced that the players will wear a commemorative patch on their jerseys. In addition to that, teams will also display a clover logo on their courts. Many believe the clover to be a reference to the Boston Celtics. Speaking of whom, the Celtics will have a “separate and unique recognition for him on their uniforms”, which the NBA announced.

The decision to retire Russell’s number does not come as a surprise. The community recognizes what he has done for the game. Russell is a proven winner with 11 titles to his name, the most in history. However, his contributions off the court have been unbelievable as well. Russell was one of the very few people to fight for the civil rights movement. He received the Presidential Medal of Freedom for the same in 2011.