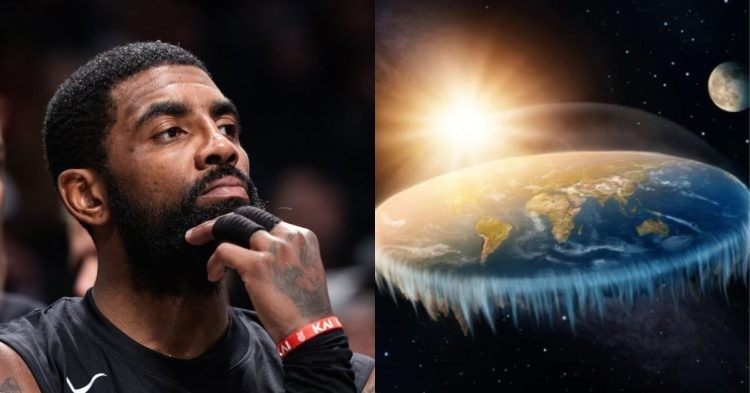 Kyrie Irving has been involved in many controversies since making his debut in the NBA. His off-the-court antics have always been catching the attention of the entire NBA world. This year, he promoted a movie that contained anti-Semitic remarks. This started a whole chain of events, including the Brooklyn Nets suspending him, together with owner Joe Tsai taking shots at him publicly.

However, after apologizing and arriving at a solution, Kyrie made his return to the team recently. Reports mention that he has fulfilled the demands of the Nets franchise, to play in the NBA again.

Similarly, Kyrie caused the world to go into a frenzy back in 2018. He received plenty of harsh criticism from fans, for his unique take and opinion on a sensitive matter.

When he was with the Cleveland Cavaliers, Irving appeared on Road Trippin’ with Richard Jefferson and Channing Frye. He mentioned, “All these things that particular groups, and I won’t pinpoint one group, they almost offer up this education. The fact that in our lifetimes that there are so many holes and so many pockets in our history… Is the Earth flat or round? You need to do research on it… they lie to us.”

In addition to that, Jimmy Kimmel also asked the Cavs superstar about it when he appeared on his show. At the Under 30 Summit, Kyrie said, “At the time, I didn’t realize the effect, I was definitely at the time going ‘I’m a big conspiracy theorist, you can tell me anything’. I’m sorry, for all the science teachers, everybody coming up to me like ‘You know I gotta reteach my whole curriculum’. I’m sorry, I apologize.”

Kyrie apologizes for saying the world is flat. #Under30Summit pic.twitter.com/uJH3fNbPqS

It seems like Kyrie did not expect the reaction he would receive with his unique perspective. According to the 30-year-old, science teachers confronted him and expressed that they were unhappy with Kyrie. As we all know, “Uncle Drew” is one of the most famous NBA players. We can assume that he has a huge impact on the world. It seems like students in the USA took Kyrie’s comments as an indication that the Earth was surely flat.

This prompted science teachers in the country to scratch their heads, as the education system in the current era teaches students that the Earth is flat. Kyrie came out with an apology and mentioned that he doesn’t want to answer that question ever again. Recently, amid the Nets & Kyrie saga, a popular astrophysicist made a remark about “Flat-Earthers”, which included the former Cavs star at one point.