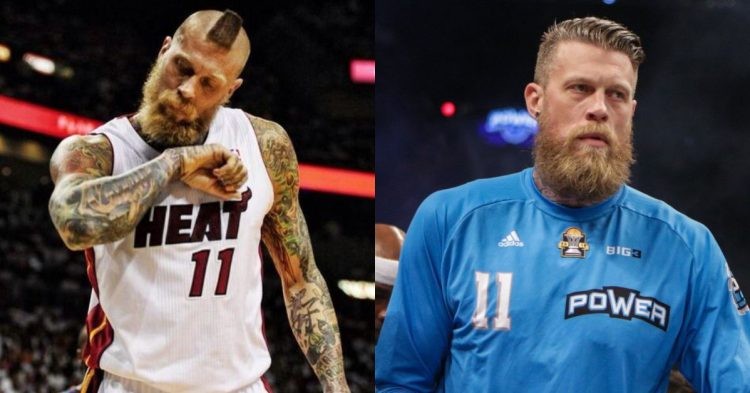 Chris Andersen was a player who was wild on and off the court. His time in the NBA earned him plenty of fans who admired him for the unique way he portrayed himself. If that wasn’t enough, the nickname that was given to him; ‘Birdman’ sounds pretty unique as well. One might wonder how that came to be.

Andersen’s teammates came up with the nickname after seeing his spiked-up hair, body size, tattoos, and more importantly, his wingspan. Birdman boasted a wingspan of 7 feet 2 in and stood at 6 feet 10 in tall. He surely deserved the nickname he got back in the day.

Did Chris Andersen retire from NBA?

Andersen had also signed for the Cleveland Cavaliers and Phoenix Suns before moving to Denver to feature in the Summer League. However, it looks like things didn’t go in his direction when the Suns management waived him. Ultimately, he achieved his dream of playing in the NBA just a few months later.

He joined the Denver Nuggets in November 2001 after a series of stints in other countries after dropping out of college. Moreover, Chris became the first D-League (NBA Development League) player to be picked up by an NBA franchise as well. The Nuggets acquired his signature after he featured a couple of times for the Fayetteville Patriots in the D-League.

Andersen stayed with the Nuggets till 2004 and averaged 4.2 rebounds, 3.4 points, and 1.6 blocks in 71 games during the 2003-04 NBA season. That year, he signed for the New Orleans Hornets (now New Orleans Pelicans). He stayed until the end of his two-year contract in New Orleans. 2006 was the hardest year for the Birdman in the league.

The NBA dismissed him after he tested positive for a drug substance that was banned. At the time, he had a four-year contract with the Hornets that was worth $14 million. The league disqualified him for two years and reinstated Andersen in March 2008. The Hornets acquired him in the middle of the 2007-08 NBA season before he chose to return to the Nuggets.

After spending four years in Denver, Andersen played with LeBron James at the Miami Heat in 2013. The pair even won an NBA championship together. Birdman played a crucial role in the NBA Finals that year, he averaged 4.4 points, 3.0 rebounds, and 0.8 steals in 5 games in the 2013 NBA Finals. He also played for the Memphis Grizzlies and Cleveland Cavaliers after spending 3 years in Miami.

That was the last time we saw Birdman in the NBA, when the Cavs traded him to the Charlotte Hornets after he faced an ACL tear. He retired from the league in 2017.

After leaving the NBA, Andersen signed a contract with the BIG3 League. For those who don’t know, famous American rapper Ice Cube and Jeff Kwatinetz founded the 3-on-3 league in 2017.  Power, a team in the BIG3 League, drafted Birdman in 2018.

Birdman helped them to a BIG3 championship in his first year. He led the league in most blocks made (11). However, his fairytale beginning to the league ended just a year later. In his second season, Chris Andersen suffered a serious knee injury. That was the last time he stepped onto the basketball court. The world does not know where Andersen is right now but he has been seen making cameos in the BIG3 League at times as a spectator.