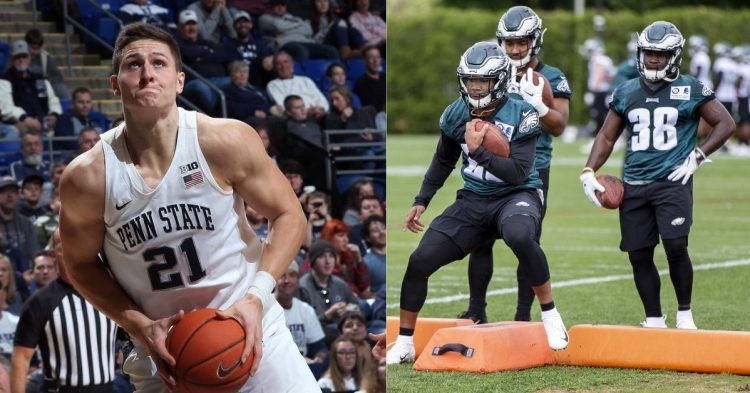 The 6-feet-9, John Harrar, played for the Penn State Universities basketball team. John during his time at Penn State broke multiple records. Playing 146 games, with the second-highest career field-goal percentage of 59.6 and fifth in rebounds. He also finished with 800+ points and rebounds during his college years.


John However, received an invitation from NFL’s Philadelphia Eagles, for a rookie minicamp. At the time John’s agent Blake Fromang of Tier 1 Sports Management announced on Twitter. John would be tried out for a tight end during the duration of the Camp. “I got really lucky, I know I got really lucky,” said John on an episode of Big Ten Network’s: The Journey.

Welcome John Harrar to the @Tier1SportsMgmt team. He is attending minicamp with the @Eagles pic.twitter.com/7OyRTIWCtb

Harrar grew up in a sporting environment in Delaware County and even partied when the Eagles won the Super Bowl. the Penn State big man was in dreamland when he received the invite. Before he became a basketball sensation, he played football at Strath Haven High School, so he had some experience with the sport.

Before Harrar decided to play basketball for Penn State, Army approached him to play football. However, John chose the former, and join Penn State. He was invited by then-coach Pat Chambers for a basketball tryout, and a month later he joined the university.

The trial didn’t result in a contract and resorted to further practice with Greg Miskinis. John practiced with the former Penn State tight end, who looked over the conditioning of the universities basketball team.

Harrar went undrafted at the 2022 NBA Draft making him an unrestricted free agent. The big man signed a contract with the Spanish basketball team Grupo Alega Cantabria CBT. The Spanish team plays in the Spanish Basketball Federation or the second-tier division in Spain.

🚨BREAKING🚨 Fresh off a HUGE win over Indiana for their alma matter, John Harrar & Co. have announced that a @PennStateMBB alumni team will officially be applying for TBT2023!

Harrar and notable former Penn State players have formed a team to play in The Basketball Tournament, and applied for it, as announced on Twitter by The Tournament.