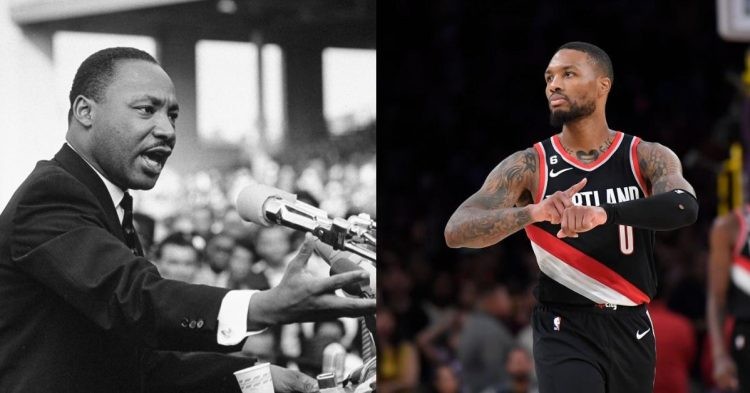 Martin Luther King Jr Day or MLK Day for short is quite an important occasion for NBA players and the league alike. NBA fans, Americans, and even normal people will certainly know about Martin Luther King Jr. He was an American activist and one of the most well-known and prominent leaders of the country.

He is best known for his work during the Civil Rights movement and was keen on making America a country free of racial discrimination and segregation. Considering that the NBA has a majority of African American athletes, MLK day is one of importance and pride to many of them. That said, one must wonder which NBA star managed to put up the highest-scoring performance on MLK day throughout NBA history.

The NBA has organized games every year on Martin Luther King Jr day. That goes all the way back to 1986 when the holiday first came into being. It turns out that the Portland Trail Blazers’ veteran leader and star Damian Lillard holds the record for most points scored on MLK day.

To those who do not remember, Damian Lillard scored 61 points to lead his team past Stephen Curry and the Golden State Warriors in 2020. By doing so, he also became the only player to record 60 points on a national holiday. This is something that no other NBA star has done in league history so far.


Since Dame is widely acknowledged as a very clutch player, it would make sense that he is the holder of this record. Additionally, his 61-point performance came in a narrow 129-124 win over the Warriors that even went into overtime. There have been multiple players who scored 40 points on this day and a couple who even scored 50. However, Lillard is the only one to have scored 60 points.

Before Dame, the player who held this record was Kemba Walker. During his time with the Charlotte Hornets, the franchise that drafted him, Walker scored 52 points against the Utah Jazz. He managed to pull this off all the way back in 2016.


The only other player to have scored 50 points on this special day is the relatively less-known Gilbert Arenas. To the relatively new NBA fans, Arenas spent 12 years in the league and averaged a respectable 20.7 points,3.9 rebounds, and 5.3 assists. His team, the Washington Wizards played against the Utah Jazz in 2007 and he scored 51 points on MLK day.

In any case, it seems players step up to the occasion on MLK day. James Harden, Devin Booker, Blake Griffin, and even Michael Jordan all scored 40+ points on this day. Hopefully, we can expect something special this season as well.