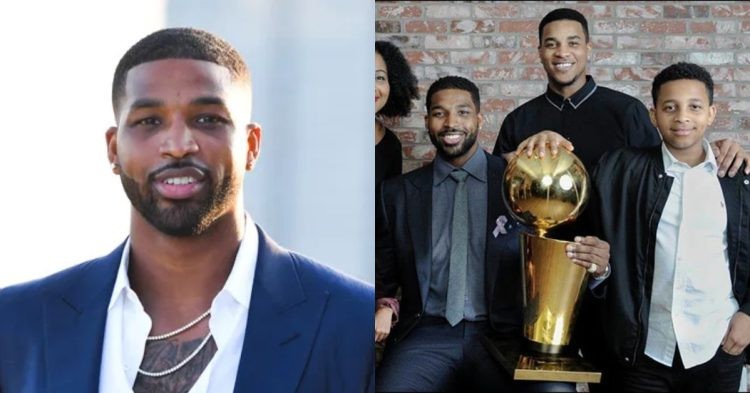 Tristan Thompson with his family (Credits: The Cut and NBA.com)

Former NBA champion Tristan Thompson has now spent 11 years in the league and is currently a free agent. He hasn’t officially retired, but is currently inactive, having last played for the Bulls in 2022. During his prime, the 6-foot-9 center was a part of the historic Cleveland Cavaliers squad that overcame a 3-1 deficit to win the 2016 NBA championship against the Golden State Warriors.

Drafted 4th overall in the 2011 NBA Draft by the Cavs, Thompson spent a major chunk of his career there. His accomplishments there also included an All-Rookie Second Team selection in 2012. After LeBron James returned to the Cavs in 2014, he joined the likes of Thompson, the then Rookie of the Year Kyrie Irving, and All-Star forward Kevin Love and would go on to bring an NBA title to his hometown in historic fashion.

While Thompson’s career averages of 9 points and 8 rebounds don’t jump off the page, he still formed a key part of the championship squad. He also had his big moments, occasionally. He scored a career-high 35 points against the Pistons on Jan 9, 2020. Unfortunately, though, Tristan is often most remembered for his off-court antics rather than his on-court play.

How many brothers does Tristan Thompson have?

Tristan was born in Brampton, Ontario, to Trevor Thompson, a truck driver, and his wife Andrea, a retired school bus driver. He maintained a very close relationship with his mother, who unfortunately passed away on January 5, 2023, following a sudden heart attack. Tristan also has three younger siblings – Dishawn, Daniel, and Amari Thompson.

Dishawn was a 6-foot-4 basketball player for Nebraska’s Northeast Junior College. Daniel won the Canadian U-11 Championship in 2015. Not much is known about Tristan’s brothers as they keep a low profile.

”I’m like the big daddy with all of them!” Tristan shared in an article on the Cavaliers website in 2016. “I have to make sure I hold them accountable. If my mom texts me and lets me know if they’re acting up, I’m going to shoot them a text, because I know what their weaknesses are. So, they either get in line or there’s gonna be repercussions.”, he added.

Amari, who has epilepsy and experiences seizures almost every day, has received the greatest care from Tristan. In order to raise money and awareness for his neurological illness, he established the Amari Thompson Fund in 2013. Since then, he has held fundraisers and other activities.

Epilepsy Toronto is heartbroken to hear of the passing of Andrea Thompson.

Epilepsy Toronto has been honoured to work with Andrea and Tristan Thompson on the Amari Thompson Fund that raises funds for programs and support services for children and families… 1/3 pic.twitter.com/ejsfkpVZSv

Talking about Amari, Tristan said, “What makes (Amari) special, is just his fight – especially a kid his age, being able to go what he goes through. He continues to fight and always be in high spirits. So, for me, as the older brother and kind of the pioneer of the family, I think it’s just my job to be able to provide and do whatever it takes – not just for Amari, but for my other brothers just to be happy and comfortable.”

Tristan also has a family to look out for. Over the years, he has had relationships with multiple women, most recently being linked up to Khloe Kardashian, who was also very close to Tristan’s mother, Andrea. He has also had children with them. He welcomed his first child, son Prince Oliver, with ex-girlfriend Jordan Craig in December 2016.

Khloe Kardashian and family arrive in LA after attending the funeral of Tristan Thompson’s mother pic.twitter.com/kuJUnETQAq

He has two children with Khloé. Daughter True was born in April 2018 and the duo welcomed a son via surrogate in July 2022.  He has a third son, Theo, with personal trainer Maralee Nichols who was born in December 2021. The duo has been since involved in a legal battle against each other, with Nichols seeking child support for Theo.

Recently, rumors surfaced that Thompson was considering retirement from the NBA in an attempt to lower his child support expenses, but nothing has been confirmed as of now.