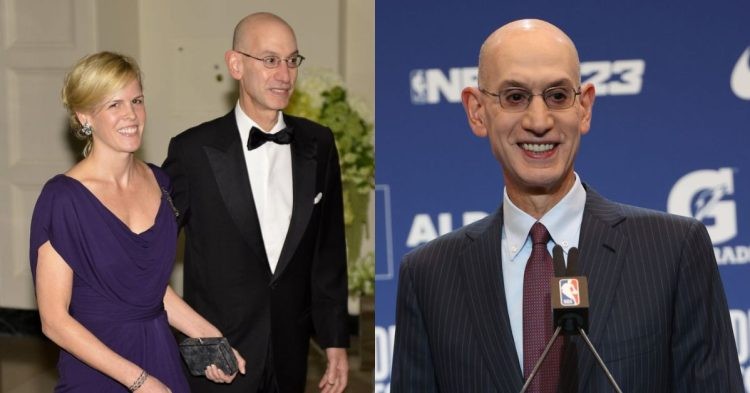 Adam Silver in a suit and with his wife Maggie Grise (Credit: Twitter)

Adam Silver is the NBA commissioner and the organizational face of the league. Albeit not as people-friendly a name as NBA superstar LeBron James. He took over the office of the commissioner from David Stern back in 2014. He is a man who has done a lot for the NBA and the sport of basketball.

Not many people are aware of Commissioner Silver’s personal and romantic life. He is married to a woman named Maggie Grise. One should wonder more about the lady who is the lifelong partner of Adam Silver and what she has accomplished as an individual. Moreover, how they met is always a story that people will want to know about.

Silver has lived quite a life. He started out his career in the legal world. Then, he served as the deputy commissioner of the NBA for 8 years. Finally, he became the NBA commissioner through unanimous voting by the NBA owners.

That alone speaks to his integrity and character. He married Maggie Grise back in 2015 and the couple has two daughters from the marriage. Maggie took on the NBA commissioner’s last name and is now Maggie Silver. She has worked as a litigation associate and as an interior designer.

Congratulations to Commissioner Adam Silver and his wife Maggie on the birth of their daughter Louise Burns Silver!

Unfortunately, there are no reports to help us find out how these two met. We know they first met somewhere in 2013. However, since the commissioner keeps his personal life out of the eyes of the media, it is difficult to find out more on the subject.

Maggie Grise is the celebrity wife of Adam Silver from the United States, as well as a well-known interior designer. https://t.co/6Ixkr6NtYi

The most prominent theory around is that they met through a mutual friend. However, neither has confirmed nor denied the same. In fact, they are so private about their lives that the wedding photos were never released on the internet.

We really don’t know much more about Maggie Grise. The media has respected the NBA commissioner’s wishes and left his private life to remain so.