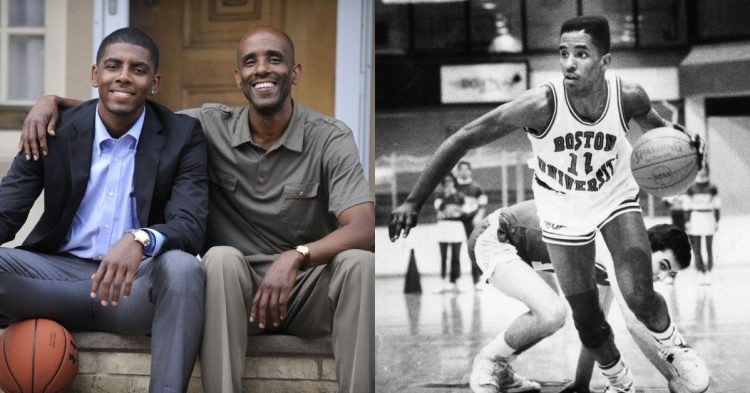 Drederick Irving during his college career and with his son Kyrie Irving (Credit: Twitter)

Kyrie Irving is one of the most talented basketball players of this generation. Not many NBA fans are aware of Drederick Irving. He is Kyrie’s father and one of his biggest supporters. One should want to know more about Drederick and what he has accomplished in life.

It wouldn’t really surprise many people to know that Drederick is a former basketball player. This makes complete sense considering his sons’ natural talent and love for the game. With that being said, we should understand more about his father’s professional career. Additionally, knowing about the rest of his family could also be useful for all of us.

What happened to Kyrie Irving’s mom?

Drederick Irving finished high school in New York. He played at Boston College. He helped his team “The Terriers” advance to the North Atlantic Conference Championship game. Moreover, they managed to win and secure an invitation to the NCAA tournament. By the time Drederick graduated from Boston College, he was the all-time leading scorer with 1931 points.

This might not seem like a lot compared to the NBA. Therefore, it is important to remind people that college basketball is for only 3 years and a lot fewer games. Drederick soon graduated and was invited to join the Boston Celtics training camp. However, apparently, he wasn’t good enough to secure a permanent roster spot. As a result, he decided to play for the Bulleen Bloomers in the South East Australian Basketball league. There he averaged over 30 points a game.

During his time in college pursuing a degree in economics, he met a young woman named Elizabeth. She played Volleyball at Boston College. There was chemistry between them and the couple soon got married. Within a few years, they had 2 children. Kyrie and his sister Asia.

Life can seem to be a tragedy at times. Unfortunately, Elizabeth passed away when Kyrie Irving was just a child. At the time they simply called it an illness. However, it turns out that her cause of death was drug-induced sepsis syndrome.

In order to show tribute to his mother, Kyrie had the date of her passing inscribed in his first signature shoe with Nike. Having both parents with an athletic background has clearly reflected in Irving’s transcendental abilities on the NBA court.