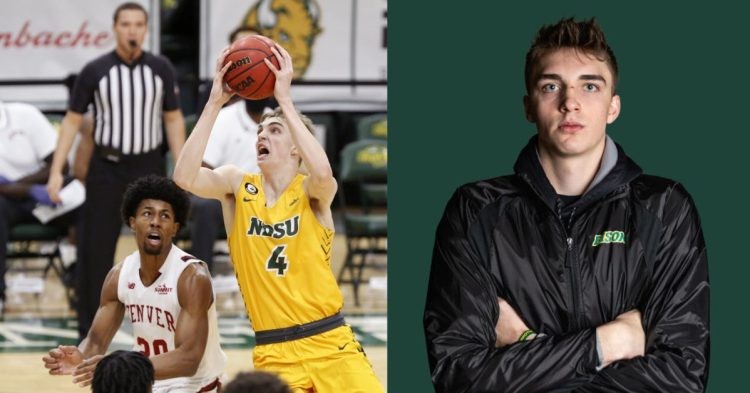 Many young prospects are making headlines for the 2023 NBA draft. Young talents such as Victor Wembanyama, Scoot Henderson, and others are making headlines 6 months away from the draft. Grant Nelson is a relatively unknown player and not much can be said about him. We’ll look at who is he and whether is he eligible for this year’s NBA draft.

Grant is a junior at North Dakota State University and plays for the University’s basketball team, which competes in the NCAA Division 1 in the Summit League. Nelson is not a popular player among the youth but is stacking some impressive numbers. Grant this season is averaging 16.1 assists, 7.9 rebounds, and 1.4 assists.

Grant Nelson is nice, but i need to see more than good highlights lol i need to watch a full game https://t.co/QA8CEL7nRb

Nelson has increased his points average in his previous 2 seasons with the NDSU, which are 6.3 and 11.6 respectively. In the above video from The Goose Man, we can see that Nelson has developed wonderfully. He is a 6 feet 11 inches monster and attacks the rim with force. Apart from his dunking, his shooting looks pretty solid.

Despite his overall development looking good, his 3-point range is average at best. In his last three seasons with the NDSU, he is shooting at 30.5%. In his last 14 games, Nelson has taken 3.6 shots from beyond the arc, shooting 21.4%. This can be compensated, but it can get better, just like all the players do, they get better with practice.

When will Grant Nelson be eligible for the NBA draft?

With the draft 6 months away, Nelson is very much eligible for the NBA draft. Every college basketball player dreams of playing in the NBA, and he isn’t different. The young prodigy has expressed his desire to play on one of the biggest stages in the world as well. He has mentioned to Bison Illustrated in the past, “I’d like to maybe become a coach or continue playing basketball. My ultimate goal is to play in the NBA or somewhere else.” With his current averages, he surely looks like a decent prospect.

this is a grant nelson dunk highlight account #SammyDimes pic.twitter.com/I00Wx6zfwf

However, despite his averages, his size will play a huge role in getting into the NBA. He is a huge lad and what many teams consider when drafting young players. For one, even Giannis Antetokounmpo is 6 feet 11 inches and went on to be a huge success with the Milwaukee Bucks. There is potential for the NDSU forward to become better with time. But we will have to wait and see if he will be declared for the 2023 draft in June.