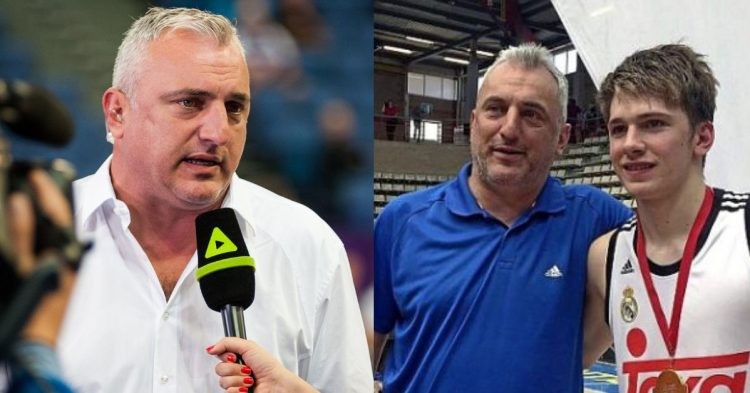 Sasa Doncic being interviewed and with his son Luka Doncic (Credit: Twitter)

Sasa Doncic is Luka Doncic’s father and has been an integral part of his life. Although Sasa and Luka’s mother Mirjam Poterbin divorced when Doncic was just a child, he has still been involved in his son’s life. After all, the passion and skill Sasa displayed for the game during his youth has clearly translated and is displaying itself in his son today.

With that being said, NBA fans might be interested in knowing more about Luka’s dad and what he has accomplished so far. Some might have already heard that he was a professional basketball player many years ago. Let us take a look at Sasa’s accomplishments on the court over the years and how it compares to his son’s accomplishments.

Unlike Luka Doncic, Sasa remained in Europe playing professional basketball throughout his life

We know that Luka dominated the Euro league, playing for Real Madrid before finally applying to and being selected in the 2018 NBA draft. The majority of the NBA has American athletes and the number of international players is certainly a minority. This was even more true in the past and very few international players were given a chance to display their abilities in the largest basketball league in the world.

Unfortunately for Sasa, he was simply never good enough to make it into the NBA. He started playing professional basketball in 1993 for multiple clubs in Slovenia. Sasa won 2 Premier A League Championships and 3 Slovenian Cups as well as a Supercup. Finally, he was able to play in the Euro league for his team Union Olimpija.


Sasa might have been a very good basketball player. However, the numbers and statistics clearly don’t reflect it. In his one season playing for the Euro league, Sasa averaged only 2.8 points, 2.7 rebounds, and 0.8 assists. He was not even a starter for his team and played only an average of 14 minutes per game.


Even though Sasa’s pro career was nothing very impressive, his son Luka is putting up numbers that we have never seen before in the NBA. Perhaps, genetics do play a role in the development and exposure of players. Nonetheless, it would appear that Doncic has become the player he is today due to his innate work ethic and skill.