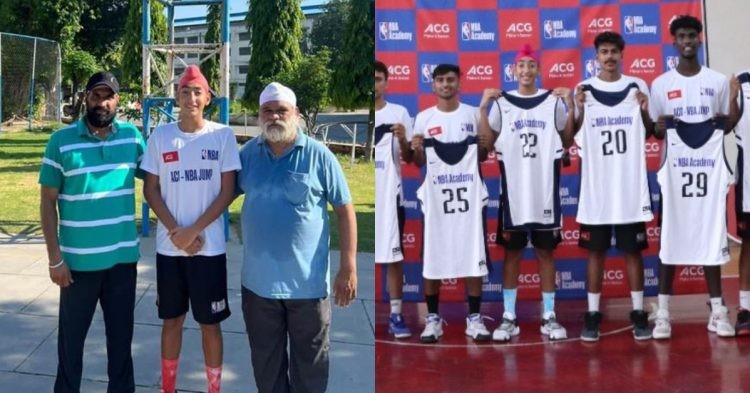 The NBA has seen many youngsters over the years. Talents from all over the world work their entire lives for a chance to play in what is one of the biggest leagues in the world. The NBA has managed to pull this off with the help of the NBA Academy.

The academy helps the league identify the best high-school talents from outside the US. The most popular countries that are familiar with the academy would be India, Mexico, and Australia. Recently, the academy held ACG-NBA Jump 2022 National Tryout, where a high-school teenager cleared the NBA trial.

The player is none other than Tejinderbir Singh. He managed to earn himself a spot after working hard for three years. In an interview, he said, “I started taking training at the PAP Basketball wing around three years ago. I did not get into sports just because it was my hobby, but because I wanted to achieve something big.”

The 15-year-old has the support of his coaches, whom he does not surprise one bit. One of his coaches, Bhupendra Singh said, “From the first one I am seeing that whatever technique is being shown to whom, he is learning it very quickly and doing it well, it shows the ability that one day he will become a very big player.”

Tejinderbir has had this success coming for him. With both his father and older brother being basketball players, there is no doubt that he was going to have a love for the sport as well. The young star also melted the hearts of Indians as he said, “I always wanted to represent India at the national level”. Apart from Tenjinderbir, 29 other players made it onto the NBA academy program, coming from all over India.

Satnam Singh became the first-ever Indian-born player to be drafted into an NBA team. In 2015, the Dallas Mavericks drafted the then 19-year-old. They took him in as the 52nd overall pick in the draft. He was the hope for all of Indian basketball, to bring it to the next level.

The 7’2 center featured in Summer League, G league, and the NBA development games for the Mavs before tragedy struck. The National Anti-Doping Agency banned the Indian for two years. The reason was that he failed a doping test.
Tags: NBA
Previous Post