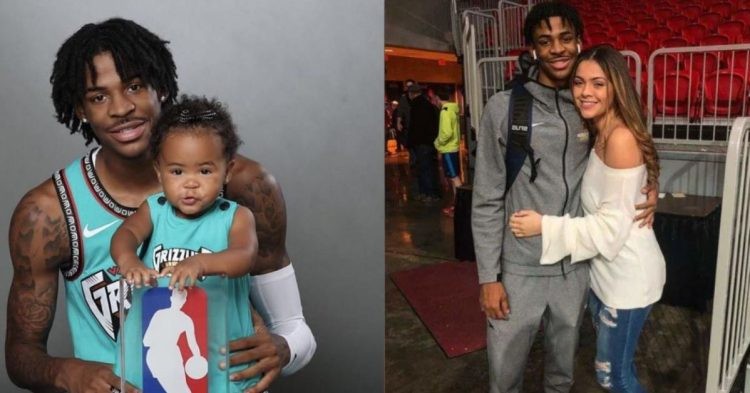 Ja Morant with his daughter Kaari and her mother KK Dixon (Credit: Twitter)

Kaari Jaidyn Morant has been put under the spotlight in recent times. After all, her father is none other than Memphis Grizzlies star Ja Morant. We have all seen Ja post pictures and videos on social media showing his love and affection for his daughter. However, not much is known about the mother of Kaari and what she is currently doing.


Considering that Ja himself is quite young and only 23 years old, NBA fans must certainly want to know more about the woman he decided to have a child with at this early stage in his NBA career. It is becoming increasingly common for NBA stars to find love and already have children at a relatively young age. Sometimes many years before they end up getting married. Let us take a deeper look into the identity of Kaari Jaidyn Morant’s mother.

It turns out that Ja Morant is not married and the mother of his child is named KK Dixon. Not much is known about her other than the fact that she studies at Fisk University. Additionally, she is also an athlete like Morant and played both volleyball and basketball at the collegiate level.

The couple started dating sometime in 2018 and soon welcomed a baby girl into the world in 2019. As we all know that turned out to be Kaari. Despite having a child together, it appears that their relationship didn’t really work out. In fact, both Ja Morant and KK Dixon decided to unfollow each other on Instagram as well as other forms of social media.

Despite a lot of speculation by the media, it is still unclear why this young couple broke up. Some have theorized that they broke up due to the strain put on the relationship by Ja Morant’s professional career with the Memphis Grizzlies. During their relationship, they posted several photos together. However, they removed them all after both of them decided to go their own separate ways. It is unclear what KK Dixon does for a living as she has tried to remain quite private. All we know at the moment is that she is a full-time mother.

Nonetheless, few can deny that they are on relatively good terms considering that they have a young child together. Additionally, they have even collaborated and introduced “Kaari and Kree’s Ultimate Colouring and Activity book”. As the name suggests, this is an interactive coloring book that allows young readers to improve essential skills such as reading, writing, counting, tracing, and a lot more. We hope that they are able to stay amicable and cordial for the sake of their daughter.