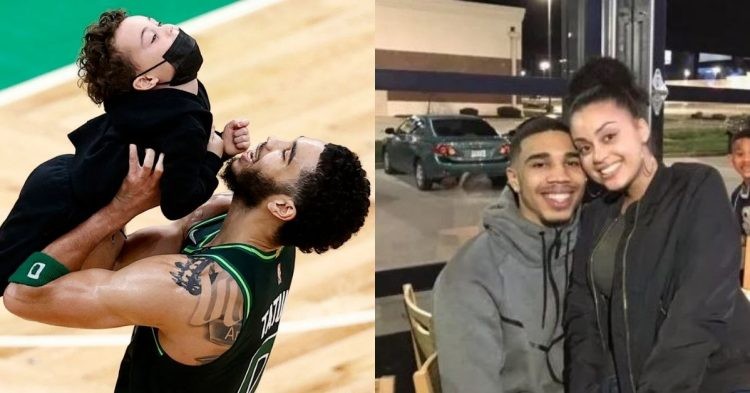 The reigning Eastern conference champion Jayson Tatum is one of the young players poised with the task of carrying the NBA into the future. He’s just 23 years old but showcased true signs of superstardom. However, his family situation is already complicated, and here is why.

Jayson Tatum and his Boston Celtics had a great season last year. They turned it up in the 2nd half of last season to secure the 2nd seed in the East. They destroyed contenders in the Nets, Bucks, and Heat in one playoff run to get into the NBA finals. However, Tatum ghosted on the biggest stage of his career and hence saw the Celtics lose the NBA title at home in game 6.

Jayson Tatum and his relationship with his baby mama

Toriah Lachell is the mother of Jayson Tatum’s child. Toriah was born on 21st February 2000 in St. Louis Missouri. That’s also the same area Tatum was born in. They both attended Chaminade College Preparatory School in Creve Coeur and were friends during that time. She currently works as a hairstylist and is the owner of The Curl Bar Boston.

They officially started dating in August 2014 and broke up in 2018. They were high-school sweethearts that even went to senior homecoming day hand in hand. Their relationship was not a complete waste of time. In December 2017, a couple months after Jayson Tatum was drafted, they brought their son into the world.

They named him Jayson Christopher Tatum jr. and very easy to guess where they were inspired for that name from. However, everyone refers to him as ‘Deuce’ Tatum. He’s grabbed all the social media clips with his extremely cute persona and high-profile dad.

“Yeah, I think that’s the plus of having a kid at 19. We’re growing up together. I think it’s cool that he’s going to be able to see me as my career goes and as he’s getting older to remember certain things and interact. Things like that. It’s definitely a plus.”

Jayson Tatum grew up under the heavy influence of Kobe Bryant and his play. But Jayson Tatum Jr. will get to witness that firsthand with an all-NBA player in his backyard. Could ‘Deuce’ be one of the few NBA children that go on to beat the legacy of their dad? Either way, we’ll all get to witness it every time he’s in the public eye.