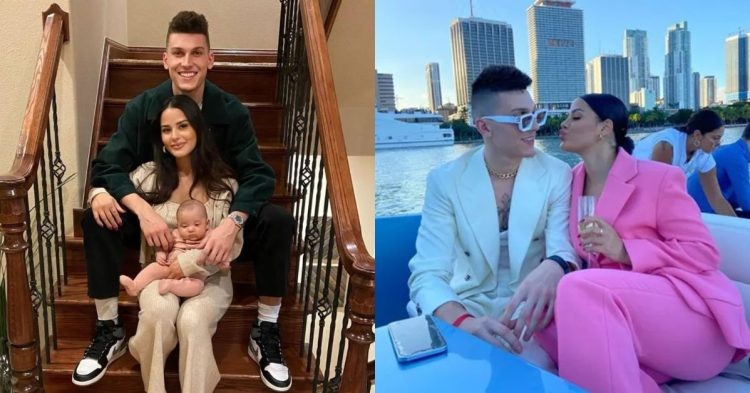 Tyler Herro has emerged as one of the best players on the Miami Heat roster. It is for this reason that his private life has become a talking point in recent times. He has been dating a model who goes by the name Katya Elise Henry for more than two years now. With that said, let’s take a look at who she is and what she does.

Tyler started dating Katya in 2020 after he was drafted into the NBA. Many reports that she worked as a part-time nanny before dating Tyler. Since then, Katya has been an Instagram model, endorsing various brands. In the past, she has addressed rumors of their marriage.

How many kids do Tyler Herro and Katya Elise have?

On Instagram, fans asked her if she ever thought about marriage through a Q & A session. She wrote, “Marriage is not something I’m in a hurry about to be honest.” The couple recently welcomed their second child just a few days ago. Their first child, Zya Elise Herro, was born in September 2021. Tyler has shared images of his daughter on his Instagram in the past.

Their second child, a son named Harlem, was born on January 12, 2023. Tyler was not present at the birth of his child but was sure to visit his newborn baby and girlfriend later on in the hospital. The couple even shared images and videos on their Instagram pages.

Not many know that the couple has gone through their ups and downs as well. Before Katya got pregnant with Harlem, cheating allegations surrounded the Heat guard. Many believed that he cheated on Katya with another woman after the birth of their daughter. When Katya posted a story on her Instagram stories that mentioned, “If you cheat on someone that is willing to do anything for you, you actually cheated yourself out of loyalty.”

That happened in June 2022. Around the same time, she also tweeted, “This hurts,” further indicating that she was going through a tough phase in her relationship. Fans speculated and thought that Herro cheated on Katya. However, these rumors were never confirmed by the concerned parties and they remain that way until now.

Tyler has been on the sidelines because of his Achilles injury. He has missed the last three games for the Miami-based franchise and is currently enjoying his private time with his girlfriend and kids.
Tags: Miami HeatNBATyler Herro
Previous Post