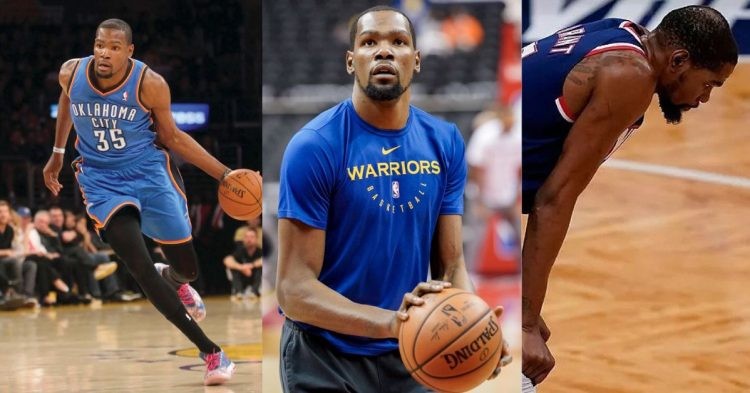 Kevin Durant is an NBA star currently with the Brooklyn Nets. It has become common news that he is unhappy with the situation there. Therefore, he looks yet again to switch teams. This would be the third time in his career he changes teams.

In order to understand why KD is demanding a trade again, it is important to analyze why he changed teams in the first place. NBA fans from 2016 will remember he was with the Oklahoma City Thunder. This is where Durant’s story began.

KD was drafted in 2007. He soon established himself as a talented player in the league. There were very few players who could resemble his play at his size. Additionally, there were just as few who could successfully guard him.

The 2x NBA champion spent 9 years of his career with the Thunder. However, they were only able to make the NBA Finals once. This was in 2012 and they were defeated by LeBron James and the Miami Heat.

There could have been several reasons Kevin Durant couldn’t lead the OKC to an NBA title. Many analysts blamed his teammate Russel Westbrook. This was because Wesbrook was the point guard and handled far too many possessions. Moreover, he was considered more aggressive and erratic in his playstyle in comparison to Durant.

OKC adored Westbrook more and 9 years later, KD decided he was done. His contract with the thunder was finally over. Therefore, he decided to become a free agent. Instantly he showed a desire to play with the western conference defending champions, the Golden State Warriors.

There are several narratives on how he actually decided to leave. The most dominant one is that Draymond Green rushed to him and “begged for help” after the 2016 NBA finals. This was because the Warriors had lost to LeBron James, Kyrie Irving, and the Cleveland Cavaliers. Additionally, GSW had a 3-1 lead in the series and lost 3 games in a row.

As soon as KD joined the Warriors, they became an undisputed dynasty. He helped them win back-to-back NBA titles in 2017 and 2018 against LeBron. They won 4-1 in the 2017 NBA finals. The next year they defeated LeBron James-led Cleveland Cavaliers 4-0 and swept him in the finals.

KD leaving helped his career the first time around. However, there is no guarantee of success in winning an NBA title.

Are Kevin Durant and Stephen Curry Friends in Real Life?