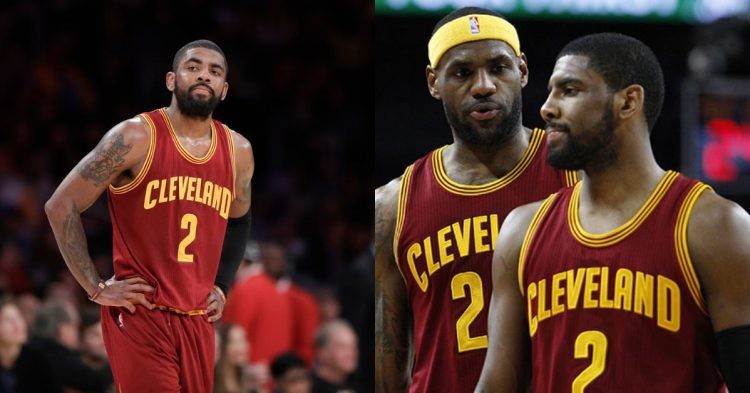 The draft lottery is just like a real lottery where 30 teams try their luck in getting the chance to draft a player that could change their franchise. Ideally, the 1st overall pick is the best-case scenario for any team but it’s rare someone gets that lucky very often. One of them was Kyrie Irving and his career was worthy of the spot he was drafted in.

On this day 11 years ago, the Cleveland Cavaliers selected Kyrie Irving with the first overall pick in the 2011 NBA draft. Irving has averaged 23.1 PTS, 3.8 TRB, and 5.7 AST over 11 seasons, 611 games, and three teams. pic.twitter.com/dQxCqgKnby

In NBA history, there have been 6 teams that have never won the draft lottery. But the Cleveland Cavaliers are on the other end of that spectrum. They have won the 1st overall pick 6 times, the most in NBA history. Those 6 picks have been Austin Carr in 1971, Brad Daugherty in 1986, LeBron James in 2003, Kyrie Irving in 2011, Anthony Bennett in 2013, and Andrew Wiggins in 2014. Out of them, LeBron James has been the best pick they’ve made and Anthony Bennett has been the worst.

Kyrie Irving was drafted after the Cleveland Cavaliers were forced into a rebuild after LeBron James’ departure. His flashy play at Duke got him drafted 1st overall. In his rookie season, he averaged 18 points and 5 assists per game. He showed great promise and made his first all-star team at the age of 18 in his sophomore season.

His great play attracted LeBron James to come back to Cleveland in 2014. This formed one of the greatest dynamic duos in the league. They instantly made the NBA finals but lost to the Golden State Warriors due to unforeseen injuries.

In 2015, they made the NBA finals again. But this time they played a much better Warriors team. The Warriors team won 73 games. GSW dominated the first 4 games of that series and took a 3-1 lead. But the Cavaliers went on to win the series with 3 straight wins. Kyrie Irving’s dagger 3 in the dying minutes of game 7 won them that title.

However, all the credit was bestowed on LeBron James and Irving was shunned. He did not like being in the shadow and wanted to carve his way. And when they lost to Warriors, now with KD, again, he decided to call it quits. The very next season, he demanded a trade. And he got that wish fulfilled when he was traded for Isaiah Thomas to the Boston Celtics.

“Leaving was inevitable. I could feel it. I didn’t feel the need to say anything because I knew the truth, and so did they. So it didn’t matter what others said…They didn’t want me there.”

There were rumors of LeBron trying to trade for Damian Lillard in exchange for Kyrie Irving. And that’s exactly what Irving felt as well. That’s why he wanted to make the uncertainty go away and begin again, on his team. It’s been 5 seasons and he’s still looking for his place in the NBA.

Nadal, Djokovic or Alcaraz: Who Is the Favorite to Win Wimbledon 2022?