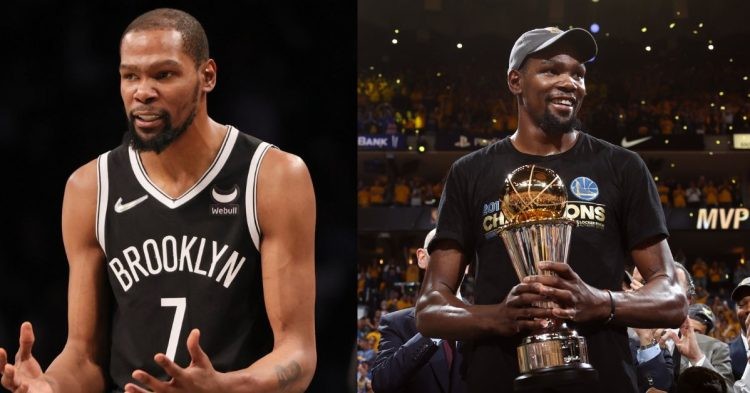 There aren’t many players that have had a better career than Kevin Durant. He has managed to stay at the top for more than a decade. From Oklahoma City Thunder to the Brooklyn Nets now, there hasn’t been a team that didn’t perform. In his whole career, KD has averaged 27.2 points, 7.1 rebounds, and 4.3 assists per game.

Together with this, Durant has also won many accolades. The former Golden State Warriors star boasts two NBA Championships with them in 17’ and 18’. Adding on to that, he also won back-to-back Finals MVPs in the years that he won the title. He also has an NBA MVP, Rookie Of The Year, and two Olympic gold medals just like LeBron James.

We scoured the internet over the last days to figure out which NBA player is the most hated.

Despite all his achievements, he is one of the most hated NBA players. In fact, it won’t be wrong to say that he is the second most hated player in the league, behind LeBron James. Although it may not be a surprise that fans hate KD, one wonders what is the reason?

One of the main reasons why fans hate KD would be his decision-making when it comes to teams. Most of his haters are OKC fans, and they have a good reason for it too. In 2015, the Thunder faced the Warriors in the Western Conference Finals. Back then, they boasted a good team with Russell Westbrook and KD together. Durant was on fire after making 40 points in Game 5.

However, they still lost a 3-1 lead to the Warriors. Make no mistake, the Warriors weren’t a bad team either. Their record was 73-9 that season. It is the best record in NBA history. However, KD proceeded to join them the season after. That hit a sour spot for the OKC fans to see their star player join the team that broke their hearts. They even went too far and started to burn his OKC jersey and posted the videos online.

Another reason why NBA fans hate Kevin Durant would be his ego. After he won the title with GSW against LeBron’s Cavaliers, Durant said something that really angered fans. He said in a GQ interview, “I made the game-winning shot in the finals against my f****g idol. Somebody that I really, really, really followed since I was a ninth-grade high schooler. I felt like he was passing the torch to me.”

Many disagreed with him saying it is not that big of an achievement to win the title with the best team ever. People started saying he only joins super teams and depended on the Warriors to win his only two rings. All the things that the haters said about GSW not needing KD came true this year. They won the title without KD and in a stunning fashion.

We can agree that Durant isn’t a player that’s perfect. He has made decisions that caused fans to hate him, but I think he doesn’t deserve it. He has been one of the best players in the world for many years. Moreover, he is a player that we will all miss when he’s gone from the league.