Giannis Antetokounmpo is a strong power forward for the Milwaukee Bucks. Coming from Athens, the Greek Freak entered the NBA in 2013 as the 15th pick. He was drafted by the Milwaukee Bucks and has been loyal to them since then. Giannis Antetokounmpo is a two time NBA MVP and is also a 5 time NBA All-Star. Giannis is also the 2021 NBA Champion and NBA Finals MVP. He had a historic night in game 6 of the NBA Finals against the Phoenix Suns. The Greek Freak etched his name in record books with putting up a 50 point closeout game. He finished the last game of the NBA Finals with 50 points, 14 rebounds and 5 blocks. He had a  64%  FG and shot 33.3% from the three point line, The 2021 NBA Finals MVP dawns the jersey number 34 and like every player, Giannis has his reasons as to why he wears the same.

Why Does Giannis Antetokounmpo Wear The Number 34?

Giannis Antetokounmpo was born in Athens Greece in 1994. He is the son of immigrants who came from Nigeria. Giannis and his family went through a lot of struggles growing up. Since his parents were immigrants, they could not find jobs easily. So Giannis and his brother, Thanasis helped support the family. They all grew up very close to each other and Giannis’s parents were both extremely supportive of their son’s careers and helped them pursue basketball professionally.

Out of gratitude for all the hard work his parents put in, Giannis Antetokounmpo found the best way to thank them while being an absolute beast on the court. Giannis flaunts the jersey number 34. The Greek Freak decided to take the last digits of the year his parents were born and throw them in on his back. His mother was born in 1963 and his father was born in 1964. Giannis’s brother also wears the reverse of the number, 43. 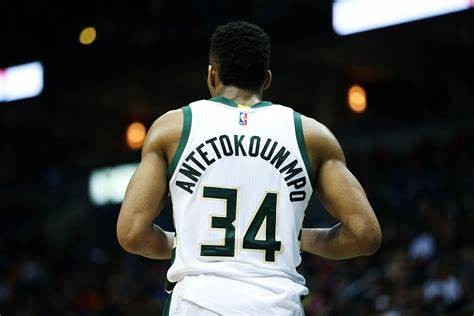 Giannis Antetokounmpo is also referred to as the Greek Freak due to his stellar, never-seen-before performances that are extremely powerful. When Giannis Decides to come in for a poster Dunk, the best thing to do is move out of the way, unless you want an absolute monster to end your career.