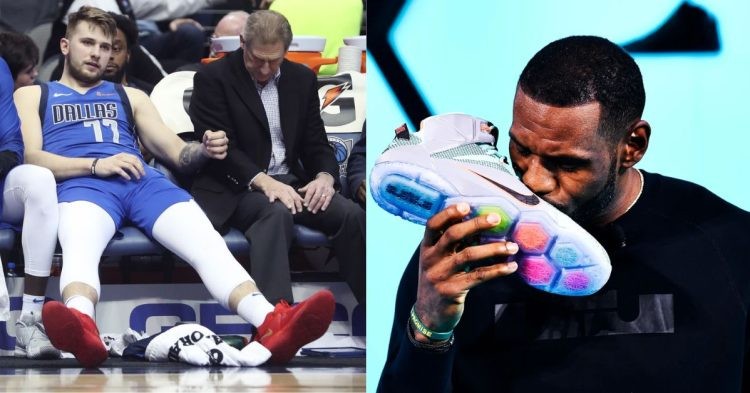 Luka Doncic is proving himself to be one of the best players in the league and a face for its future. As some of us already know, popular superstar athletes are eventually given huge shoe deals from companies like Nike, Puma, Adidas, and several others. Considering that Luka is putting up numbers that have drawn comparisons to Michael Jordan, Kobe Bryant, and LeBron James, it was only a matter of time before he agreed to a deal.

That said, NBA fans must certainly want to know which company Luka Doncic decided to go with. Many would assume that it could potentially be Nike. After all, it has already signed multiple stars across the league like LeBron James, Kevin Durant, and Giannis Antetokounmpo. Let us look at whether Baby Bird followed in the footsteps of the others and why he didn’t end up signing with Nike.

It turns out that there were many suitors for the Dallas Mavericks star to start his shoe line with. As we all know, LeBron James has a lifetime contract with Nike and has promoted the brand extensively throughout his NBA career. As a result of this, he even tried recruiting Luka Doncic to join his brand under “Team LeBron“. The King revealed how all of this went down when being interviewed on a show called “Road Trippin“.

Luka reportedly signed a 5-year deal with Jordan Brand last year. With this proclamation by LeBron, you have to wonder if four years from now if LeBron launches a “Team LeBron” brand under Nike if he’ll still try to get Doncic on his list of athletes. pic.twitter.com/LARh74KTmN

“When Luka was going through his contract negotiations with Nike and you saw him at one point he was wearing Jordans, he started wearing other brands on his feet during practice…I wanted to begin Team LeBron and have Luka as my first signee with Nike. This is what I wanted. I don’t believe that my guys at Nike were ready for that and obviously, they were not cuz he ended up going to Jordan…I wanted Luka to be my first signee And it didn’t happen, he’s still under the umbrella of Nike… That’s how much I believed in him.”

Despite how much the King wanted Luka Doncic to become the newest member of Nike under a unique “Team LeBron” shoe line, that never came to fruition. After all, as the Los Angeles Lakers star revealed, the people at Nike were simply unwilling to go for this and were not ready to commit to Doncic.

Luka Doncic is signing a shoe deal with Jordan. (via @ShamsCharania)

As a result of this, Luka took his skill to Air Jordan and will look to increase the popularity and range of the brand even more than Michael Jordan did.