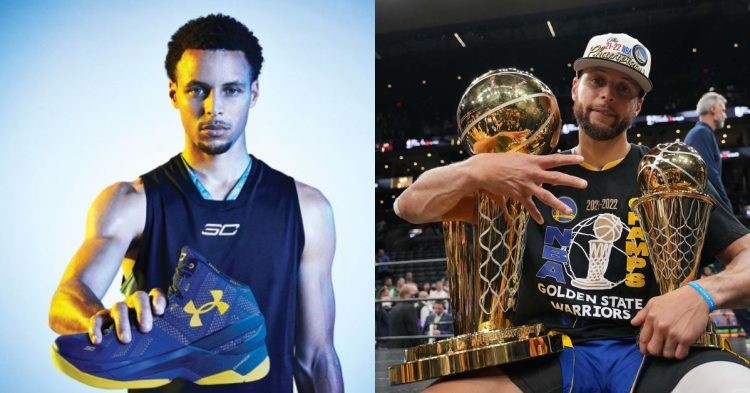 Stephen Curry has been one of the most influential players in the world for the last few years. He has changed the game completely with his shooting. If that wasn’t enough, he also took the throne from Ray Allen for most 3-pointers made in NBA history. He sits comfortably at the top right now with 3,117 of them.

The 2022-23 season would be Steph’s most successful one to date. He brought home his fourth championship ring, together with his first Finals MVP trophy. Curry averaged 25.5 points, 6.3 assists, and 5.2 rebounds in 64 games during the regular season.

He was instrumental to the Golden State Warriors success this year. The Chef was cooking for the 2022 NBA Finals against the Boston Celtics. In the six games, he averaged 31.2 points, 6.0 rebounds, and 5.0 assists. One of those games included a historic 43-point game to help the Warriors topple the Celtics.

Despite all his achievements and accolades this year, Under Armour has chosen not to promote the GSW star. Steph is the face of the brand and he has helped the company make a lasting impact on customers with his line of products.

Steph made the switch to UA in 2013. Initially, the question on fans’ minds was: why did he leave Nike to join Under Armour? However, Steph listed several reasons for his decision later on. One of them included being able to be the face of a huge brand. However, UA is not using this to its advantage right now.

The Baby Faced Assassin is an NBA champ. If he was still with Nike, they would have released several commercials and videos as soon as the Warriors won the title. However, they released a limited edition shirt for the Warriors’ win. If they did that for the team, we can only imagine what they would have done with Steph to capitalize on the ring he won.

That’s not all that Under Armour missed out on. This season, Steph debuted the “night night” celebration after putting his opponents to sleep. He even did the celebration against every team that the Warriors faced in their playoff run.

The celebration has taken the world by storm. Many athletes around the world have done the same celebration as Steph after scoring or winning a trophy. Football stars have mainly celebrated in the same way as Steph.

Steph Curry started a global movement and Under Armour did NOTHING to support him.

Breaks my heart to think of what the narratives could have been with the Swoosh behind him… https://t.co/FShhvV7cfB

Just like the Twitter user mentioned, Steph really started a global movement. Under Armour could have used his celebration to promote him this year and they could have had a good response for it as well. In 2016, Morgan Stanley calculated that Steph could have been worth around $14 billion to Under Armour, according to Business Insider.

When that report was published, Curry only had one championship ring. He also won the Kia NBA MVP that year. Since then, Steph has added three more rings on his fingers and holds a Finals MVP trophy as well. That $14b valuation would have definitely increased and even multiplied. Stephen Curry will most likely be worth more than at least $15 billion to Under Armour right now, who are missing out on a golden marketing opportunity.