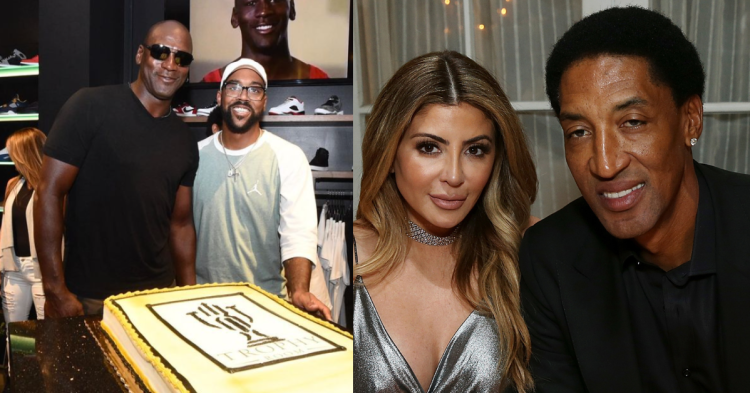 On Sunday, Scottie Pippen‘s ex-wife Larsa Pippen was spotted dining with Marcus Jordan, the basketball legend Michael Jordan‘s son. According to pictures from TMZ, it’s the first time the claimed couple has been spotted together.

Michael Jordan’s son, Marcus Jordan, is seen on what appears to be a double date with Scottie Pippen’s ex-wife, Larsa Pippen, down in Miami. https://t.co/k8cBNGVMsH

Cameras captured the two together as they were dining at Miami’s Zuma Japanese restaurant. The Pippens divorced in 2021 after 14 years of marriage. Larsa Pippen is 48 years old, and Marcus Jordan is 31, which is a 17-year difference in age. She approached Pippen earlier this year and said the divorce had “traumatized” her.

With the Chicago Bulls, Michael Jordan and Scottie Pippen were longtime teammates and shared six NBA titles in the 1990s.

How will this affect Michael Jordan and Scottie Pippen’s relationship?

The relationship between Pippen and Jordan hasn’t been the smoothest ever since Pippen objected to the way MJ portrayed his character in the “Last Dance” documentary tracing Jordan’s life and career. The formidable on-court duo was far from best friends off the court, as The Last Dance discovered. In an interview earlier this year, Pippen revealed everything wasn’t so rosy.

“Michael was bigger than the game, you know. Even my initial arrival to Chicago he was a big, iconic figure for the NBA. So, we never really had that off -the-court relationship”, Pippen told GQ in a recent interview.

They looked to be on two distinct dates, according to the story. But Scottie must feel the effects of this one since he famously played in MJ’s shadow for all those years despite being an all-time great in his own style. Larsa, according to TMZ, maintained a low profile and showed some unease after discovering that fans were observing her.

Larsa seems to have gone past her ex-boyfriend and replicated the renowned Jordan-Pippen relationship off the court. Many Twitter users have expressed conflicting emotions in response to the discovery that Scottie Pippen’s ex-wife Larsa is dating Michael Jordan’s son Marcus.

One other instance when Larsa did the same would be when she was reportedly dating the popular rapper Future. According to the reports, Larsa was in a relationship with the rapper, which caused her marriage to end.

Larsa Pippen is on a mission to date everyone Scottie Pippen has ever met.

The 48-year-old’s decisions may have damaged MJ and Scottie’s relationship even further. The speculations suggest that the former Bulls teammates may have some tension between them after recent rumors.