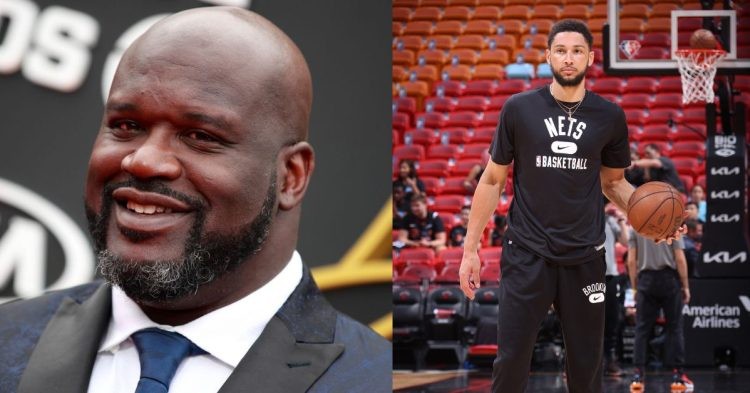 Ben Simmons is one of the players that had been involved in a year-long saga. When he was with the Philadelphia 76ers, he refused to play for the team and also said that he will not train with the team. Many reports say that he was feeling injured, together with many other claims. However, Simmons has recently brought some light onto the saga.

In an interview with the Old Man And Three, Simmons mentioned the Sixers. He mentioned how people in Philly treated him unfairly. In addition to that, he also called out player, that we never saw coming.

“He always wants to say were LSU brothers, this and that. If you’re my LSU brother you would have reached out by now.”

Ben Simmons took a shot at the one and only Shaquille O’Neal. He said, “People go through it… Doesn’t matter how much money you got, how famous you are, like it’s real, people go through everyday struggles… I think it’s kinda ignorant, like Shaq and Chuck sometimes what they’re saying. ‘Cause they have a platform to kind of like protect us and, you know, do good.”

“Um, obviously they’re supposed to criticize us, you know, we’re basketball players. But when it comes to personal stuff there’s a level of respect they should have. Even Shaq, like, when I was dealing with everything going on, I actually messaged him and he put it out. And I was like, alright,” the Australian added.

The Brooklyn Nets player also said, “I DM’d him and I was like, ‘why are you saying this if you don’t even know the story?’ ‘Cause he always wants to say like yo, we’re LSU brothers, you’re my brother, all this, that. If you’re my LSU brother you would’ve reached out by now and it’s been months since I’ve been dealing with this. You ain’t reached out once and said like, ‘hey, you OK? Like, what’s going on.”

As Simmons said, Shaq mentioned in the past that the young player was his Louisiana State University (LSU) brother. However, it seems like Ben is upset that the former NBA champion did not try to reach out and help his “brother”. When he was with the Sixers, Shaq did not go easy on him. The 50-year-old said the Australian was a crybaby and could not take criticism like his former Philly teammate Joel Embiid.

In addition to that, Shaq also mentioned that Ben Simmons was his LSU brother, hinting that he only had at a go at him to motivate him. But from Simmons’ perspective, Shaq should have contacted him personally. It seems like the Nets player would be looking to proving his doubters wrong after moving to Brooklyn. With Kevin Durant and Kyrie Irving staying, the Nets have a good chance of getting a good result in the 2022-23 NBA season.