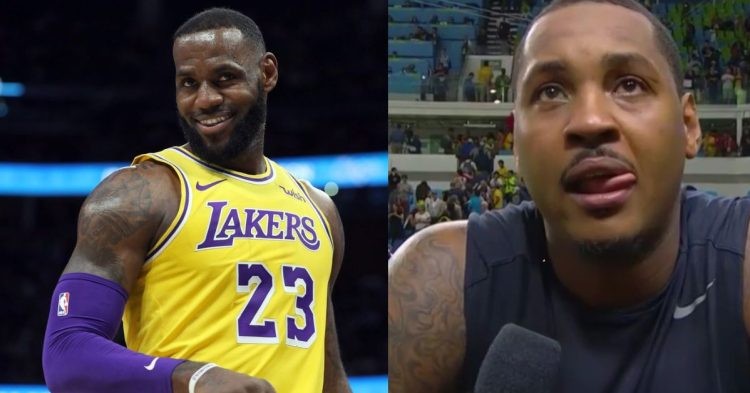 LeBron James and Carmelo Anthony go way back together. They were both in the 2003 NBA draft and considered contemporary hyped-up draft prospects. King James was selected 1st in the draft and Melo was 3rd. While James soon carried his team to the finals and eventually multiple NBA championships, Melo never had the same luck with his teams.

Carmelo and LeBron may have been rivals on the court for several years. However, that does not mean they were not close friends. In fact, we found out exactly how close they are when Melo revealed a story of how LeBron saved his life to another NBA veteran Dwayne Wade. This sounds quite exciting and deserves a closer look.

While this might seem like an exaggeration or a story one watches in a movie, that is exactly what happened. We are familiar with NBA players being friends and even going on cruises with each other during the offseason. However, Melo revealed that things took a very ugly turn for him during one such cruise.

“He saved my life” pic.twitter.com/xLZePGl6yv

“I look up. The current is taking me in the middle of the ocean like opposite from the boat…I know, and it was windy and it was all types going through my head. I’m gonna be honest with you. Then I see, I look up at the boat and I see, I see Bron jumps off the boat like he is Macgyver.”

Carmelo went on to break down what happened next, “Yes exactly, he jumped off the boat into the water. He was bringing me back with one arm. He’s swimming with the other arm and he carrying me in one arm… That was special, I can’t hold you, he saved my life. Yo Bron I appreciate that, you saved my life that day. Them little flippers weren’t working for me.”

Quite the roller coaster of a story. One can only fathom the bravery it takes to jump into the ocean without more than a moment’s preparation to save a fully grown man who could be drowning. This is another reason LeBron James truly deserves to be called King James.
Tags: Carmelo AnthonyLeBron JamesNBA
Previous Post