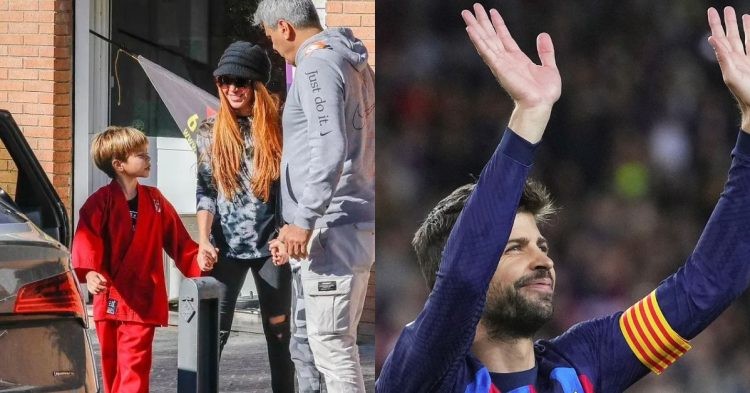 Shakira with her kids and Pique at his last match (Credit: Google)

Gerard Pique announced his retirement this Sunday, having played 397 games for Barcelona and leading them to win La Liga, Champions League, Copa Del Ray and the club world cup. Pique has terminated his contract with Barcelona after their 2-0 win against Almeria amid the clubs financial vows. Pique enjoyed his last few moments on the pitch with his sons, kicking around a football with them.

Shakira pictured smiling as she takes kids to Karate class

Pique wanted his sons to attend his final game at Camp Nou but Shakira had other plans as she was spotted keeping a low profile and smiling as she took Sasha and Milan for their Karate class before the two boys were allowed to attend their father’s last game.

The boys wore FC Barcelona’s kit and enjoyed some time on the pitch kicking the ball around and being present for their father. As upset and devasted Pique looked, the presence of his kids made the Spaniard feel at ease and happy.

How old are Shakira’s kids?

Pique and Shakira met on the sets of the song Waka Waka in 2010, they started seeing each other after Spain won the world cup that year. Shakira and Pique kept their romance private for quite a while. She tweeted this picture and wrote in Spanish “I present my sun to you.”

Shakira and Pique welcomed their first son in 2013. Milan now 9 years old is their first son, “We are happy to announce the birth of Milan Piqué Mebarak, son of Shakira Mebarak and Gerard Piqué,” the singer wrote on her website.

They welcomed their second son Sasha in the year 2015. Sasha, now 7 years old, is often seen attending the Barcelona games with his brother and either of the parents as their guardian.

Pique and Shakira never married each other as Shakira wasn’t ready to tie the knot and wanted him to see her as his girlfriend as both now lock horns over the custody of their children.