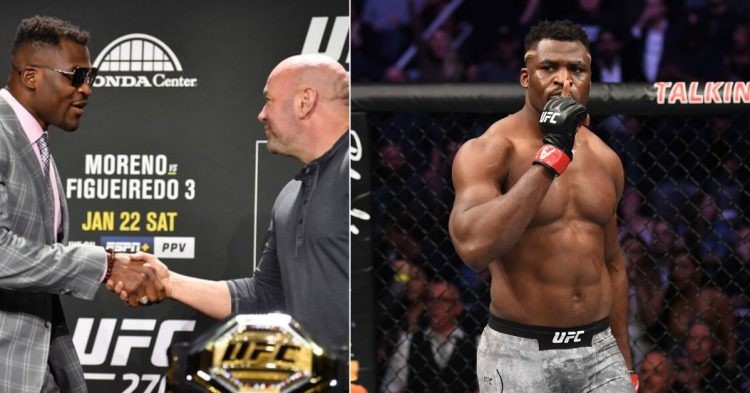 Francis Ngannou’s exit from the UFC has certainly shocked the MMA community. The Baddest Man of the Planet is no longer a part of the Ultimate Fighting Championship following failed contract negotiations with the company.

UFC President Dana White came forward after UFC Vegas 67 to announce Ngannou’s exit. White stated that the promotion failed to come to terms with the UFC heavyweight despite offering him the highest fight purse for a UFC heavyweight. He also mentioned the likes of Brock Lesnar, to further emphasize how much UFC was willing to pay Francis Ngannou. Regardless, Ngannou rejected the offer and as we have it, the former UFC Heavyweight Champion is now a free agent.

Simply put @francis_ngannou did not get released by the @ufc. He fought out his contract while still being the Heavyweight Champion. Make no mistake, Francis is in no way afraid of anyone fighting in the UFC. He is a man of extraordinary courage who stands for his beliefs

There’s a narrative going around, one that was fueled by UFC President Dana White himself that Francis Ngannou was scared to take on the absolute best of the division. Needless to say, this has sparked outrage on social media, with fans and fighters alike coming in support of Francis.

Francis Ngannou also broke his silence on the matter in a recent appearance on The MMA Hour with Ariel Helwani, speaking volumes about what he really wanted from his UFC contract and how they were outright rejected by the UFC.

Gone are those days when fighters could earn on top of their fighter pay by having sponsors don their fight gear when they stepped inside the Octagon. After the Reebok era, and now in the Venum era, fighters are not allowed to have in-cage sponsorship. They are paid a pre-decided purse for donning the brand affiliated with the UFC and it ends there.

Ngannou revealed that he wanted to get in-cage sponsorship, but the request was denied by the UFC.

Health insurance for UFC fighters has been a topic of debate for a really long time. While UFC fighters are independent contractors, the contracts actually keep them in a state of being employed. And if that’s the case, it’s only fair they are given health insurance considering the nature of the sport they compete in.

Francis Ngannou’s request for health insurance in his UFC contract was also denied, leading to his ouster from the UFC.

Advocates dedicated to helping UFC fighters with their contracts

What UFC fighters really need is a good representation. Jon Jones’ decision to hire Richard Schaefer came in the wake of this very idea. Ngannou wanted to revolutionize UFC contracts and not just seek something for himself in a selfish cause, but cause a stir and make a mark. It’s safe to say, UFC did not have it and hence they decided to part ways with Francis Ngannou.

“I asked for a right of sponsorship, which we have been ripped off. We can’t have sponsorship, health insurance, couldn’t have. I asked for a fighter advocate, somebody in the board meeting who advocate for the fighters. They say no, they don’t do business like that.” Ngannou revealed.

Francis Ngannou asked if he would ever return to the UFC.#TheMMAHour pic.twitter.com/2NUVydlDxi

Francis Ngannou is now looking to make his return sometime in July, and he believes it will be in a boxing bout. Ngannou is targeting Tyson Fury and Anthony Joshua as ideal opponents and has set his eyes on MMA return as well.