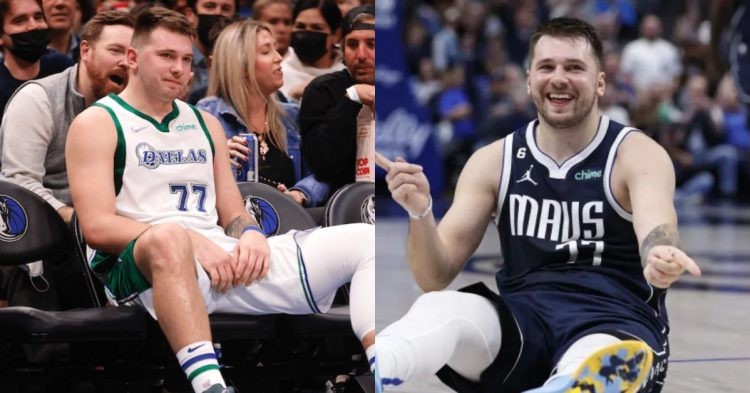 Luka Doncic sitting down on the court (Credit: Twitter)

Luka Doncic is playing at an incredible level. He has scored multiple 50-point games in a short span of time. Something we have never seen before. However, to some people, his weight is still an issue that needs to be addressed.

As we all know, basketball is a sport that depends on explosive athleticism and speed. A hefty frame like the one Doncic has, who weighs almost 230 lbs (104 kg) is simply not considered ideal in a sport of agility. Despite this claim against him, Luka has still been balling out. That said, we should wonder what fans have to say about his weight and whether it could hold merit, at least in the future.

Luka Doncic’s weight could prove to be his downfall

We could dismiss all of this as just purely hating on Luka Doncic. Even though he might not be as lean and muscular as people would like, there is no denying he has what it takes to get the job done. The Dallas Mavericks star does not rely on athleticism to dominate. Instead, he uses his basketball IQ and skills to get to his spot and release a near-perfect shot.

Luka Doncic has a high bball IQ and he understands angles and change of speed. Kid just flat out knows how to play the game. Keep falling in love with these unskilled players with athleticism. Yea you can dunk but what else you got?? 🤷🏽‍♂️

Nonetheless, some people are still of the opinion that Luka should make a commitment to his weight and athleticism.

“Dallas Mavs should consider dealing Luka Doncic. The guy is 23 & his body type is already on the downturn as far as maintaining NBA success. Yes, he’s a superstar, but unless he makes a committment to his weight & continued athleticism, his days as a force are likely numbered.”

Dallas Mavs should consider dealing Luka Doncic. The guy is 23 & his body type is already on the downturn as far as maintaining NBA success. Yes, he’s a superstar, but unless he makes a committment to his weight & continued athleticism, his days as a force are likely numbered.

This might not be a very valid statement to make. Fans have shown several instances of Luka Doncic displaying athleticism to dispute these claims. This is despite the fact that even former NBA players like Kendrick Perkins make claims that Doncic is LeBron without the size and athleticism.

Luka Doncic is a baby LeBron minus the Size and Athleticism!!!

Even if Luka Doncic does not develop his athleticism or manage his weight, it is fully possible for him to still have enough moves and use his size to dominate. After all, his jump shot takes a significantly lower toll on his body when compared to the ferocious dunks we see from others.

Every time I see Luka Doncic finish a cost to coast with an ferocious dunk I think of all the tweets about his below average athleticism that we could read before the draft. 😏 pic.twitter.com/fRjYg27Mmt

At the moment, people are certainly divided about his conditioning and athleticism. Nonetheless, there is a lot more to the game than raw speed and strength. Doncic is living proof of that.