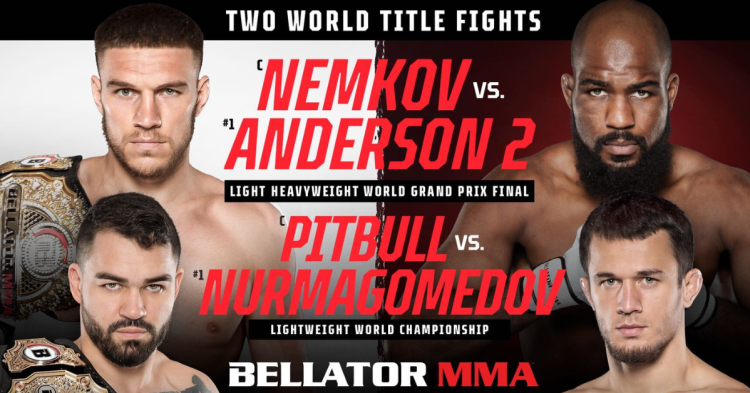 Bellator 288 goes down this weekend on November 18 inside Wintrust Arena in Chicago, Illinois, United States. The much anticipated Bellator PPV will feature the final fight of the Bellator Light Heavyweight World Grand Prix Tournament, where Vadim Nemkov will defend his light-heavyweight gold against challenger Corey Anderson.

In the co-main event of the evening, Bellator lightweight champion Patricky “Pitbull” Freire will take on Usman Nurmagomedov in his first title defense. Nurmagomedov is undefeated in his mixed martial arts career and will step inside the cage with a perfect 4-0 record in Bellator.

Corey Anderson will look to become the Bellator light-heavyweight champion after his last attempt against Nemkov ended on a No-Contest after an accidental head-butt in the third round back at Bellator 277.

Meanwhile, Usman Nurmagomedov under coach Khabib Nurmagomedov will look to become the first fighter from Dagestan to hold the Bellator gold.

How to watch Bellator 288: Vadim Nemkov vs Corey Anderson

For fans in the United States, the event will go down on November 18. Fans can stream it live on Showtime. The start time of the Bellator 288 main card is scheduled to start at 9 PM EST / 6 PM PT. Meanwhile, the preliminary card will stream live on YouTube and begins at 6 PM EST / 3 PM PT.

As for fans in the United Kingdom, Bellator 288 will go down on Saturday, November 19. The main card will begin around 2 AM GMT. British fans can streal Bellator 288 live on BBC iPlayer and the BBC Sport website.

For fans in Russia who are eagerly waiting for Patricky Freire vs Usman Nurmagomedov, Bellator 288 will begin at 5 AM MSK on November 19, Saturday.

For fans in Brazil, Bellator 288 goes down two hours after US time. The main card is expected to begin at 11 PM BRT on November 18, Friday.

It’s important to note these timings are subject to change depending on the duration of each fight on the preliminary card.