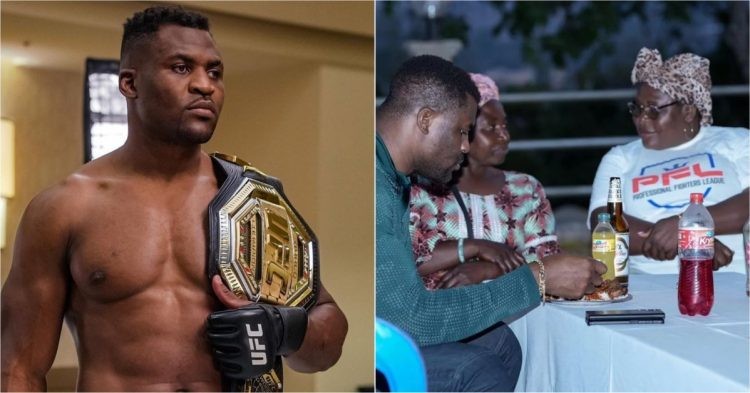 UFC heavyweight champion Francis Ngannou drops a huge hint about his future! Ngannou last fought almost a year ago on UFC 270 in January 2022. Surprisingly, he beat Ciryl Gane on the card with a dominant wrestling display. However, his wrestling display was not by choice. Ngannou was injured heading into the fight at the beginning of 2022.

As a result of that, Ngannou has now spent a year outside the Octagon. However, the UFC has not stripped him and they have given him time to recover from his reconstructive knee surgery. Fans are expecting to see him back in action sooner than later. However, it may not necessarily be in the UFC. Very recently, Ngannou shared a picture where he was enjoying a family dinner.

Interestingly, one family member on the table was wearing a PFL shirt. For fans who are unaware, PFL, or Professional Fighters League is one of the most known MMA promotions outside the UFC. They have a broadcasting deal with ESPN and recently even launched a PPV division. PFL was in news recently as they signed Jake Paul recently.

It is well-known that Jake wants to create a fighter’s union to improve the sport of Mixed Martial Arts (MMA). The Problem Child has been pretty vocal about the lack of fair compensation. Plus Jake’s presence will certainly bring a lot of eyeballs to the promotion. Hence, jumping ship to PFL does not seem like a bad option. Fans are also of the opinion that Ngannou may be PFL bound.

👀 Thats his mother. This might be a message for us.

Probably after the jones fight

Hopefully Jake Paul can get Francis paid like he deserves

Francis, in the heavy weight tournament, would be hilarious

Is Francis Ngannou out of contract with the UFC?

Francis Ngannou, along with Jon Jones, is perhaps among one of the fighters to speak up against the UFC. Jon Jones has missed almost three years of action as he could not come to an agreement with the UFC. Although Ngannou is not quite there yet, the 36-year-old is certainly unhappy with his pay. For his first title defense against Gane at UFC 270, Ngannou earned a reported $642k.

Compared to Israel Adesanya, who apparently makes $5-7 million per fight, it is certainly a very low amount. Ngannou also went after the company for its contract policy. The Predator alleged the UFC of holding its fighters in “captivity.” So there is certainly a huge chance that Ngannou leaves the UFC in the near future. So the question becomes, when does his contract expire?

If MMA journalist John Nash is to be believed, Ngannou may already be out of contract! In a Twitter thread, Nash speculated that Ngannou’s contract most likely ran out in December 2022. However, UFC President Dana White sounded optimistic about retaining Ngannou’s services. In an ESPN interview last December, White spoke about’s Ngannou’s contract with the UFC.

“I think that we’re heading in the right direction. Listen, there is no doubt about it that this is where Francis should be. And Francis should finish his legacy here at the UFC”

Will The Predator fight in the UFC ever again?

Despite all the speculations regarding his contract, Ngannou is perhaps shaping up for the biggest challenge of his career. Since losing to Stipe Miocic and Derrick Lewis, Ngannou has turned his career around and finished all of his opponents except Ciryl Gane. However, if all goes according to plan, he may very well face Jon Jones at UFC 285.

Jones has been waiting for a long time for a shot at the heavyweight title. The bout was initially going to take place at UFC 282. But, Ngannou’s lack of fitness delayed the dream fight. Since then, Francis has dropped videos of him training in the gym. So it does look like Ngannou will be ready in time for UFC 285.