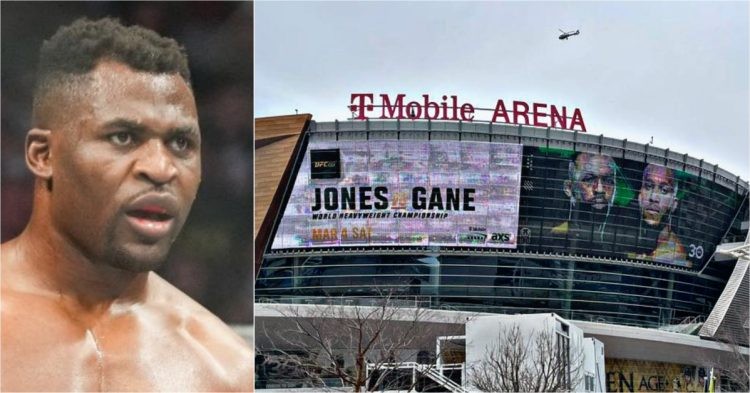 It looks like the fans will finally get to see the former UFC light heavyweight champion Jon Jones back in action. Jon vacated his championship in order to pursue his dreams of becoming the UFC heavyweight champ. However, his fight will not be against the current heavyweight champ Francis Ngannou. Instead, he will fight Ciryl Gane for the belt at UFC 285.

The initial reports had it that Jon Jones would face Francis Ngannou at UFC 285. Fans were waiting with bated breath for the company to confirm the bout officially. However, a recent advertisement outside the T-Mobile Arena in Las Vegas is advertising a bout between Jon and Gane for the heavyweight championship. Fans filmed the advertisement and the clips are going viral.

It’s looking like #UFC285 has its main event…and it’s a big one. 😳pic.twitter.com/2TrQykzPMq

It is clearly visible that the company is billing the bout as the “World Heavyweight Championship” fight. Nowhere does it mention that the bout will be for the interim title. Jon has a record of 26 wins, 1 loss, and 1 No-Contest. Gane, on the other hand, has a record of 11 wins and 1 loss. There is no doubt that the fans would love to see the two fight for the belt.

I've been told the Gane vs. Jones T-Mobile graphic has been taken down, was a behind-the-scenes mistake. Fight not done deal.

However, Steven Morrocco from MMA Fighting has clarified the situation. According to his sources, the hoarding was up due to a mistake and neither fighter have officially signed on the dotted lines. But, there is certainly interest in the bout from Gane’s side as he very recently called out Jones for a fight. But, it begs the question, what is going on with Francis Ngannou?

Has Francis Ngannou left the UFC?

Francis Ngannou is not happy with his contract situation in the UFC. Since knocking out Stipe Miocic at UFC 260 to win the belt, The Predator has been butting heads with the company because of his compensation or lack thereof! Their relationship was its most toxic right ahead of UFC 270 in January. Ngannou publicly slaughtered UFC for not giving him a big-money contract.

Ngannou was somewhat proven right as he reportedly received under $650,000 for defending his heavyweight title. Ngannou even implied that he would be open to leaving the UFC if the contract situation is not sorted. But things seemingly cooled down as UFC President Dana White came out to add that he wants Ngannou to stay with the company.

However, Ngannou recently posted a series of pictures where one of his family members was wearing a PFL shirt. It sparked the rumor that Ngannou may be eyeing a move to the company. This latest leaked poster for Jon Jones vs Ciryl Gane further puts fuel to the fire of that speculation. Fans are also speculating if Ngannou’s chapter with the UFC has come to an end or not.

This means Francis Ngannou is out of the UFC officially?

If this Gane vs Jones news is true, then they done @francis_ngannou dirty if it’s not an interim fight

Francis Ngannou may have the greatest backstory out of all the champions and the UFC couldn't build it.

Every megastar the company has ever had is not because of Dana White but in spite of him.

🚨🚨 Francis Ngannou has been released by the UFC

It is clear from his social media posts that Francis Ngannou is preparing for a comeback. Will it be for the UFC? It remains to be seen.