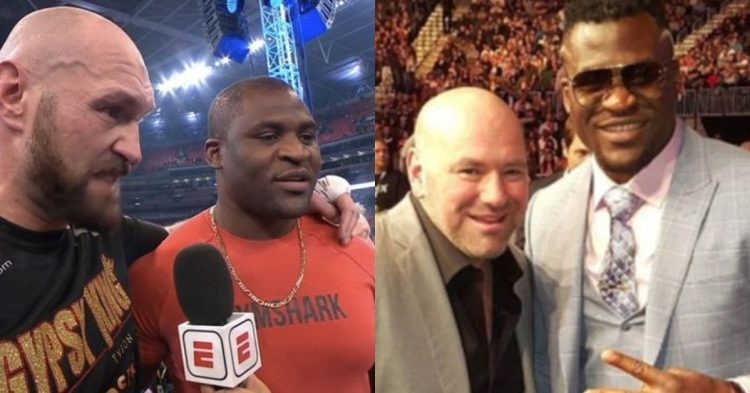 Francis Ngannou is yet to receive a boxing offer after rejecting a new UFC contract. (Credits: YouTube)

Recently, the fight world was shocked by the news that Francis Ngannou is no longer a part of the UFC. In a post-fight conference, UFC President Dana White revealed that Ngannou has rejected their contract offer. Thus, the Cameroonian-French fighter would also be stripped of his UFC Heavyweight title.

Following his departure from the UFC, ‘The Predator’ clarifies that he wishes to achieve something in boxing. However, Ngannou believes that he is an MMA fighter first and still has more to give to that sport as well. Ideally, Ngannou would like to have a boxing match with either Fury or Joshua first before returning to MMA.

Speaking about what he wishes to do next, Francis says some very interesting things. “Before, we could not do anything concrete beyond the social media stuff. Whatever it is, if it is with Tyson Fury, I will take it. I have no problem doing boxing with 4oz gloves, we will figure it out. Tyson Fury or Anthony Joshua would be my first ideal opponent.” As such, Ngannou believes in going for the cream of the crop in his very first boxing fight.

Previously, Tyson Fury and Ngannou seemingly agreed to a hybrid fight. After beating Dillian Whyte, Fury and Ngannou came together to announce their Rumble in the Jungle 2, a fight with MMA gloves in the ring. According to Francis, “it is time” for Fury to make good on his promise and agree to the fight.

If a potential fight with Fury falls through, Ngannou will shift his attention to British heavyweight Anthony Joshua instead. However, despite Ngannou’s willingness to fight him, we are yet to hear anything from Joshua’s camp.

Francis Ngannou does not have any boxing offers

Ever since Ngannou’s announcement of free agency, there have been plenty of rumors of where he may fight next. From potentially joining up with Jake Paul over at the PFL, to maybe trying bare-knuckle fighting, there are numerous options for him. Moreover, Ngannou’s coach, Eric Nicksick even prompted ONE FC to be a possible destination.

However, we are yet to see anything on the boxing front. As such, it is believed that AJ’s promoter, Eddie Hearn would jump at the prospect of setting up a super fight with Ngannou. Currently, the British boxer is set to take on either Jermaine Franklin or Demsey McKean in an April return. Without a doubt, a fight against Ngannou would be much more eye-catching.

Previously, Ngannou was represented by his former manager, Marquel Martin. But for quite a while now, the former UFC Heavyweight champion has been without a manager. According to many, including Conor McGregor, Ngannou desperately requires a firm to represent him. Taking to Instagram, Conor wrote in his story, “Correct representation is imperative. Seek @paradigmsports”

With no offers or discussions from either Eddie Hearn or Frank Warren, it appears that Ngannou’s plans for a boxing match are currently dead in the water. If he wishes for a possible fight with Fury or AJ, getting a manager should be at the top of Ngannou’s list.

Do you believe Ngannou will get his fight against Fury or Joshua? Will he heed Conor’s advice and hire Paradigm Sports? Where do you want to see him fight next? Leave your thoughts in the comments below.