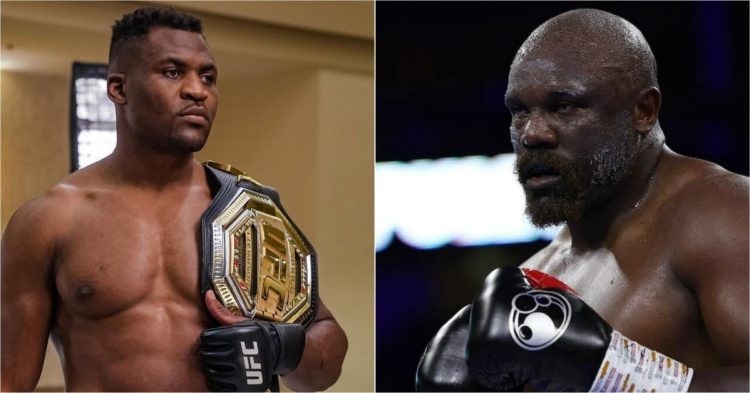 Francis Ngannou vs Derek Chisora in the works. (Credit: Twitter)

Although it will take the fans some time to get used to it, Francis Ngannou is not a part of the UFC any longer. After an intense contract negotiation between Francis and the UFC, the two parties just could not come to an understanding. Hence, the company let the reigning heavyweight champion walk out of the door. However, one man’s loss is another man’s gain as Ngannou has seemingly found his next opponent.

According to a report from TheBreadBatch, Ngannou is aiming to make his boxing debut in the coming months. Fans may wonder who Ngannou is looking to fight. The report adds that he is in talks to secure a bout against former boxing world champion Derek Chisora. Fans may remember, Chisora fought Tyson Fury in December 2022 for the WBC heavyweight belt.

Although Fury got the win in the 10th round of the fight, Chisora fared much better than Dillian Whyte. So it is definitely a piece of exciting news for the fans. Ngannou is not going after a completely unknown fighter. Although Derek Chisora is 39 years of age, he is still an elite competitor. Chisora has fought the who’s who of boxing.

Hence, he would be a great opponent for the former UFC heavyweight champion. UFC President Dana White recently added that Ngannou wanted to leave the UFC because he wanted easier fights. However, if the Derek Chisora fight comes to fruition, it will certainly discredit White’s theory.

Fans desperately wanted to know where Francis Ngannou would end up next. After fans spotted one of Ngannou’s relatives in a PFL shirt, there were speculations that he would sign for the MMA promotion. However, Ngannou always had boxing in his mind and it looks like he has finally found his first offer. While it is not Eddie Hearn or Bob Arum, Ngannou is in talks with KSI’s Misfits boxing.

Misfits Boxing, partly owned by YouTuber-turned-boxer KSI, is reportedly willing to book Ngannou’s heavyweight debut against Derek Chisora. Although there is no belt on the line, it is going to be a stepping stone for Ngannou. There is no secret that The Predator wants to fight the current WBC champ Tyson Fury in a boxing ring. But, Fury currently has Oleksandr Usyk to deal with.

If Francis can manage to beat Derek Chisora, there is every chance that he will call out Tyson Fury next. Fans should not be surprised if The Gypsy King actually shows up to the event to witness the action in person!

So what are your thoughts on the news? Do you want to see Francis Ngannou in boxing? Let us know in the comments down below!