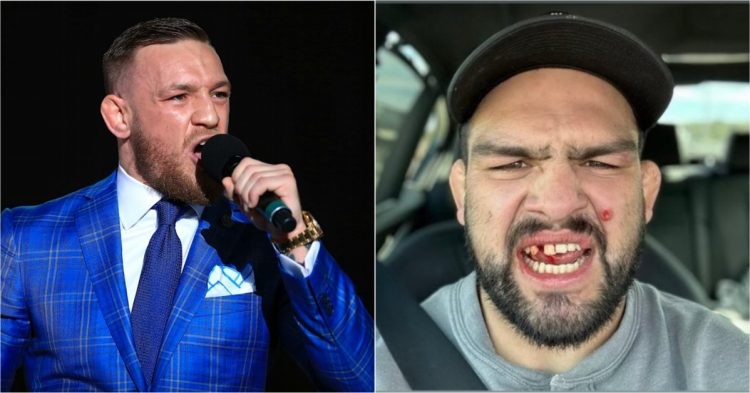 Kelvin Gastelum’s 2023 did not get off to an ideal start. He pulled out of his main event fight against Nassourdine Imavov due to an injury. This marks the third consecutive time Kelvin Gastelum has been forced to pull out of a bout. Gastelum previously had to pull out of yet another bout against Nassourdine Imavov and against Dricus du Plessis previously to his most recent one.

Kelvin Gastelum was replaced by Sean Strickland in the main event. He later clarified why he couldn’t fight at UFC Vegas 67 with a post showing him missing a tooth. Conor McGregor, the UFC’s biggest draw, reacted to Gatselum pulling out of the fight, pointing out an infection on the 31-year-old middleweight’s face.

The Notorious sent out a post on his Instagram story which read, “Absolute scruff this thing is. That’s full-on staph infection all over his f*****g face.”

“A full f*****g hole omg and it’s his second time to attempt to enter competition like this. Wtf! clean your mats. Wash yourself. F*****g go to the doctor! Scruff,” McGregor continued. It seems Conor McGregor thinks Gastelum is afflicted with the same disease as Dustin Poirier, a staph infection.

Staph infections are a common disease in the close-contact sport of MMA. However, this is not the first time Gastelum has pulled out of a fight due to a staph infection. It would benefit Gastelum to heed Conor’s advice as he missed yet another opportunity to rejuvenate his career.

Kelvin Gastelum did not react kindly to Conor’s advice

Conor McGregor even mocked Dustin Poirier when he was hospitalized due to a staph infection. Poirier didn’t let his hospitalization stop him from retaliating as he hit out at Conor. Clearly, the Diamond didn’t enjoy Conor’s suggestion. And now Conor turned his attention onto the original UFC Vegas 67 headliner, Kelvin Gastelum.

Turns out, Gastelum wasn’t too pleased with the Notorious’ advice either. He lashed out at the former double champ, accusing him of using cocaine and PEDs. Gastelum responded to Conor, saying, “Relax u lil leprechaun. The coke and steroids are kicking in.” This is likely in reference to Conor bulking up to star in the “Roadhouse” remake.

The Irishman put on a lot of muscle during his layoff after the injury he suffered at UFC 264. He now plans to compete in the UFC’s welterweight division, or so he has teased. Conor now frequently posts pictures of his physique on social media, seemingly proud of the added muscle and bulk.