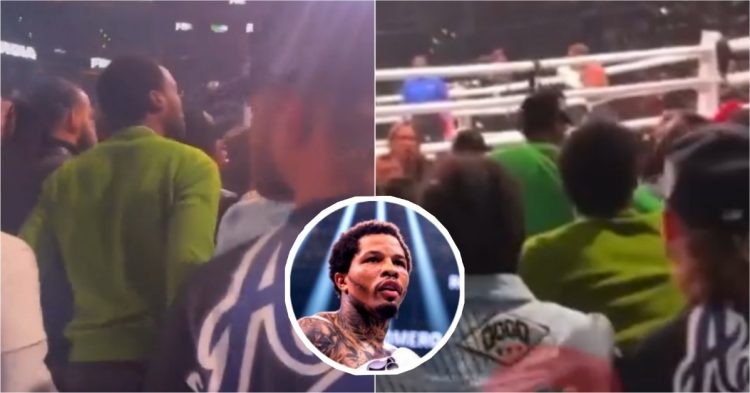 Meek Mill in a brawl during the Gervonta Davis fight. (Credit: Twitter)

Gervonta Davis and Hector Luis Garcia finally fought after a long controversy. However, by the end of the bout, there was another hot topic of discussion!

While the sport of boxing is more than a century old, not often the referees have stopped the bout because of a scuffle in the crowd. It was quite a sight to see the two boxers standing in the middle of the ring, while a fight was playing out in the audience.

Chileeeee!!!! #MeekMill got into a heated exchange at the boxing match and #Wallo was TTG behind him ohkay 👀! pic.twitter.com/n55HnHcdD2

During the 8th round of the contest, the broadcasting cameras picked up the fan fight. One fan, who filmed the whole incident, spotted the rapper Mike Mill. He was seen going after someone in the crowd. While there was confusion initially about the incident, it was later reported that Mill’s argument was against Gary Russell Jr.

After the PPV ended, Fight Hub’s Marcos Villegas reported on the news. Marcos revealed in a tweet that he spoke with Showtime executive Stephen Espinoza. Espinoza revealed that Gary Russell Jr and Mill caused the whole situation. After a few minutes, Mill and his team were ejected from the arena. But some may wonder why the two fell out.

I would never let no petty shit escalate to let somebody movie run …. I just walked away .. I came to support tank and boots!!!!!! Good wins ✨✨✨✨✨

There are rumors that Gary is not exactly a big fan of Gervonta Davis. Meek Mill, on the other hand, was there to root for his friend, “The Tank.” So one can assume that the confrontation had something to do with that as well. After the whole scenario, Meek tweeted about the situation and revealed that he “walked away” from the fight.

Gervonta Davis was under a lot of pressure to deliver on the night. Just days before the fight, Davis was arrested for alleged domestic violence. However, he denied all the claims and accused his girlfriend of smearing feces on his toothbrush. There were doubts if the bout would even happen or not. But the contest went ahead as planned and Davis showed his class in the ring.

There were moments when Garcia landed a few good blows. But Gervonta Davis ultimately proved too good for Garcia. As the bout played out, Davis took charge of the fight more and more. After the 8th round, Luis Garcia did not answer the bell. He was quoted saying that he had problems with his vision. Garcia even validated Davis’ power after the bout.

As far as Gervonta Davis is concerned. he now holds 28 total wins with 26 KOs. Apparently, he will fight Ryan Garcia next and the bout will reportedly take place in April. Reports are, the fight will take place at a catchweight of 135lbs. It is a dream fight for many and it seems like the fight will finally happen on April 15.