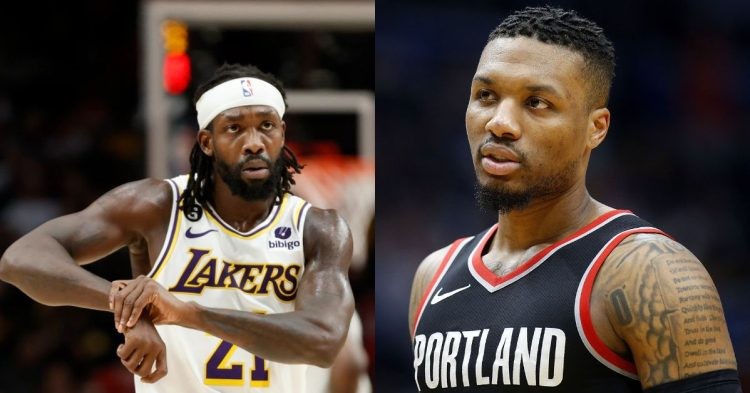 The Western Conference is highly crowded this time around, every game can be crucial to go in the post-season. The Los Angeles Lakers traveled to Portland to face Damian Lillard’s Trail Blazers. It is well known that the Lakers point guard, Patrick Beverley has a long-standing beef with Lillard. Tonight the two went toe-to-toe and things surely got heated.

During the first half, Beverley interrupted Lillard’s free throw routine and Lillard reacted to it. Beverley is known for his hall of fame-level trash talking, this season he has been disciplined, but not tonight. The Lakers guard ended up receiving a technical foul for the interruption. However, the Lakers managed to get a 20- point comeback win against the Blazers.

The Lakers have been battling outside the 12th spot for quite a while, trying to string in wins. They did find some momentum, but it was all for nothing as Davis picked up an injury keeping him out for a while. However, the Lakers have a backup in the form of Thomas Bryant, who is filling the big shoes left out by Davis.

The Laker-Blazers game was going to be an exciting match-up and it sure lived up to it. With both teams battling for the play-in spots. The Blazers blew up a 20-point lead and gave away the win to the Lakers. On that note, Beverley is the one who may have led to the downfall of the Blazers after half-time.

The Lakers guard Beverley started his psychological game with Lillard at the free-throw line. However, what took the show was when he celebrated the win with Lillard’s signature celebration, “Date Time.” It has really made a difference for the Lakers, and Beverley fans will love it. Fans took to Twitter to voice their reactions to it.

he was in dames head all night

he’s such a bum to be acting like that. dame is 10x the player he will ever be

Dame got put in prison

what time is it? Not dame time 😭

Patrick Beverley has been a player who will get in your head, as the Lakers trailed 25 points at halftime. The Lakers ended the night with 9 points ahead of the Blazers. It was another King James performance with 37 points. Bryant is looking like an able deputy for the injured Anthony Davis with a 31-point performance tonight. The Lakers will be hosting their city rivals Los Angeles Clippers on Wednesday, let’s hope the Lakers keep the momentum and energy from this game going.