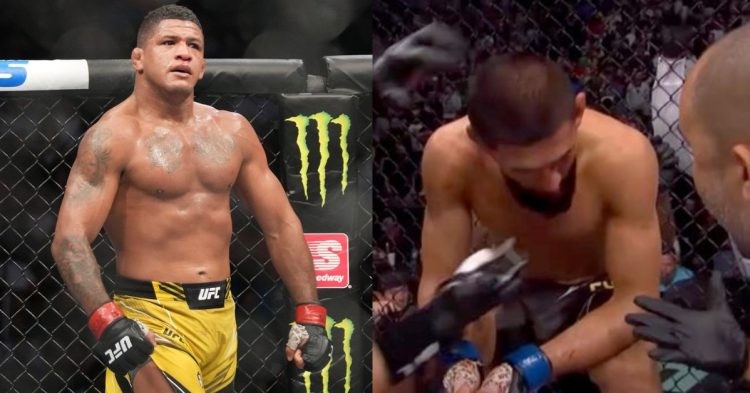 Gilbert Burns and Khamzat Chimaev had one of the best non-title UFC fights. The two welterweights tore the house down at UFC 273. The fight against Burns was the first time Khamzat had really been tested after entering the UFC and he passed it with flying colors despite the stiff opposition from Durinho. However, one occurrence during the fight really shocked and frightened the Brazilian.

In an interview conducted in Gilbert’s native tongue of Portuguese, he revealed how Chimaev’s corner really surprised him. Burns said, “I heard yelling… Out of nowhere, when I was trying to catch my breath, I hear yelling from his corner.” Durinho then asked his cornermen to move so that he could see what was going down.

That's one fired up corner 🔥

Burns then detailed the scene that unfolded before his eyes. He continued, “I’m looking at him, he had his head down. His coach was screaming and I said ‘Holy s***’.”  This moment in between rounds really showed Burns how intense Chimaev and his cornermen really are. This will have left a lasting impression on the Brazilian fighter.

As Burns gears up to face Neil Magny in Brazil, this incident and the fight with Chimaev will surely be in the back of his mind. Magny is a legitimate threat to Burns with the most wins in UFC welterweight history. However, Durinho, who has only faced the best of the best will welcome this challenge with open arms.

The shocking stats behind Gilbert Burns vs Khamzat Chimaev

Khamzat Chimaev absolutely tore through the UFC’s roster after arriving on the scene. He picked up two victories in 10 days after beating John Phillips and Rhys McKee. Chimaev also decimated Gerald Meerschaert in 17 seconds to pick up the quickest victory in his career.

But, as mentioned before, Gilbert Burns gave Khamzat Chimaev his toughest challenge yet. However, when one delves deeper into the stats, it becomes apparent just how close their fight was. Burns is the only fighter in the UFC to push Chimaev past the second round. Only Chimaev’s debut match against John Phillips went into the second round. And even then, the Chechen fighter dispatched Phillips in the second minute.

Another stat that makes this fight such an outlier is the significant strikes landed. Burns outstruck Chimaev during their bout. However, what makes this all the more impressive is the fact that he landed 100 times more strikes than all of Borz’s previous opponents combined.

Burns landed 119 strikes at UFC 273, and all 4 of Khamzat’s other opponents combined landed only 1. And this is why Burns, despite his loss, wants to chase Khamzat into the UFC’s middleweight division for a rematch.